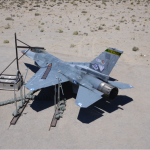 Since childhood, aircraft dog fights have captured many of our imaginations.  Even for those of us who have not seen actual combat, Hollywood movies put us inside cockpits to experience the gut-wrenching drama of an enemy missile heading our way, the wailing missile warning alarm, and the pilot’s deployment of countermeasures immediately followed by a HARD high-g turn.  But these pilot actions are not accidental.  In actual combat, the outcomes of such events are influenced by tactics, techniques, and procedures (TTPs) dictating countermeasure execution and timing in sequence with flight maneuvers.  Simply put, TTPs are critical operational instructions by which U.S. military pilots fly, fight, and win.  In addition, TTP viability and effectiveness are judged through flight tests supplemented by exhaustive modeling and simulation (M&S).

At the end of the M&S chain is Endgame Manager. Endgame Manager’s role is to assess the final outcome of engagements where missiles get a little too close.  Endgame Manager assessments have to be correct to assure TTP credibility and the greatest probability of aircraft and pilot survival.

While fully realistic scenarios include the relative motion of both missile and aircraft, an initial assumption was that Endgame Manager credibility could be assessed via a static ground test. (Missile-aircraft velocity vectoring within Endgame Manager was already understood as accurate.) To this end, the test design process began. The team selected an F-16 as the target aircraft based on the availability of full-up aircraft test hardware and a detailed aircraft geometry model. The team also selected warhead types/sizes and engagement conditions to provide challenging conditions for Endgame Manager. Primary warhead-selection factors included blast yield and fragment size/count. Engagement conditions (missile-aircraft orientations and separation distances) were selected to adhere with expected encounter scenarios and to produce tests that caused significant, but noncatastrophic, combined blast/fragmentation damage to the aircraft.

Team members considered several test design concepts before settling on two test scenarios that involved missiles with similar fragment types but different explosive yields. Each test would have the warhead (complete with surrogate fore and aft bodies) detonated while stationary above the aircraft. Blast and fragment spray for Test #1 would be directed toward the aircraft’s aft right quarter. That for Test #2 would be directed toward the forward left quarter. Separating the damage zones prevented ambiguities of test results, allowed rapid
back-to-back tests, and reduced range time/cost.

AFLCMC used Endgame Manager to assist in test design by ensuring that engagement paths and interactions were representative of expected conditions and that resulting damage would provide useful V&V data. The burst point location was determined by using Endgame Manager’s fuzing methodology in conjunction with trajectories provided by the weapons program office. Endgame Manager’s Forced Miss mode used the velocity vector and orientation for both target and threat along with horizontal and vertical miss distances to calculate a burst point. Endgame Manager then sent the threat down its trajectory containing the Point of Closest Approach (PCA). The burst point derived from Endgame Manager matched the PCA generated by weapons program office data with some offset due to the threat-specific fuze delay. This offset was used to ensure testing at a burst point that produced useful data (i.e., a significant amount of warhead fragment hits, but not so many that the aircraft was completely devastated). Once representative missile-aircraft positions/orientations were identified and locked in, AFLCMC set missile and aircraft velocities to zero to generate predictions of the static ground-test outcome. Predictions included the
blast pressure profile, fragment spray pattern on the aircraft, fragment sizes, and fragment velocities.

While the 96 TG prepared and coordinated the test plan, NAWC obtained missile and full-up F-16 test assets. Test preparations continued with missile fore and aft body acquisition/fabrication, missile test stand fabrication, and instrumentation setup (as shown in Figure 1). Instrumentation consisted of an array of thin fragment-time-of-arrival plates affixed to the aircraft’s upper skin and redundant arrays of blast pressure gauges at varying radii from planned detonation center. Aircraft fuel tanks were filled with water. This action allowed projectile- induced hydrodynamic ram without risking fuel fire that might destroy the aircraft before damage could be assessed. After a few pretests to gather early data and verify suitability of the test setup, NAWC positioned the Test #1 missile above the aircraft exactly as modeled. Although the test was limited to an endgame assessment, missile-aircraft engagement circumstances remained combat representative.
Test #2 went much the same. All data necessary for Endgame Manager validation were obtained.

Aircraft damage assessment began immediately after Tests #1 and #2. These assessments began by capturing dimensioned photographs and recording positions of all fragment penetrations. Damage assessment continued with high-resolution 3-D laser scans of the entire aircraft surface. When contrasted with baseline 3-D scans, the locations and dimensions of every change to the aircraft surface were quantified, including every fragment hole, dent, and element of blast deformation.

As illustrated in Figure 2, the 3-D scans were then correlated with Endgame Manager damage predictions by projecting an orthogonal coordinate system on the F-16 scan. This correlation/project allowed definition of x,y,z coordinates for every point on the aircraft and the
test setup (e.g., pressure transducer location) with a high degree of accuracy. Impact points predicted by Endgame Manager were translated into this aircraft scan coordinate system and then overlaid onto the scan data as a separate computer-aided design (CAD) layer. This action enabled qualitative and quantitative comparisons of the number of predicted vs. actual impacts in a given area. The 3-D scans also defined sensor locations and (with precisely known distances) ensured the accuracy of fragment velocity calculations for model validation.

Upon conclusion of testing, JCAT and the 388 AMXS arrived to assess the total extent of aircraft damage and estimate damage effects on aircraft operation. Damage assessments began with Test #1. Blast damage and each element of fragment damage were traced along their shotlines to determine damaged components. Components damaged by blast/fragmentation were noted by JCAT and functionally identified by the 388 AMXS. Findings were recorded directly on 3-D scans of the damaged aircraft to eliminate ambiguity. Once all damages were noted, the 388 AMXS considered Test #1 damage as a whole and rendered an estimate of how the overall damage state would affect aircraft operation had this been an actual combat incident. JCAT and the 388 AMXS performed a similar analysis for the stand-alone Test #2 damage state. Beyond Endgame Manager, results of this detailed damage analysis are being used to assess the credibility of fault trees within aircraft vulnerability assessment codes.

Through joint-Service collaboration, warhead damage effects data were gathered for validation of Endgame Manager. Not only was care taken to allow direct correlation of tested and modeled engagement scenarios, but application of a high-resolution laser scanner ensured precision of all measurements critical to the project’s success. These high-resolution scans also proved useful to the JCAT team for documenting damaged systems without ambiguity. Ultimately, scanned data provided a valuable, permanent, and quantifiable archive of each test event. In addition, should future analyses be required, or if questions arise about the test, scanned data can be revisited for additional measures.

At the end of the day, every possible engagement condition and TTP countermeasure and maneuver are graded via M&S. Endgame Manager makes the final determination of whether a TTP passes or fails. Validation of Endgame Manager, through data produced by this effort, provides greater confidence that TTP countermeasures are effective and that pilots called upon to employ them have the best odds of successfully accomplishing their mission and returning safely home to their families. May the odds be ever in their favor!

Mr. Greg Czarnecki is the Research, Development, Test, and Evaluation Team Lead for the 96 TG’s Aerospace Survivability and Safety Office. For the past 35 years, he has supported aircraft survivability testing and modeling. Mr. Czarnecki holds an M.S. in materials engineering
from the University of Dayton and is a member of JASP’s subject-matter expert team for aircraft vulnerability reduction.

Mr. Mitch Shedden is a vulnerability analysis engineer for the Combat Effectiveness and Vulnerability Analysis Branch, AFLCMC/EZJA. For the past 5 years, he has provided M&S subject-matter expertise in support of LFT&E for Acquisition Category I programs. Mr. Shedden holds a B.S. in mechanical engineering and an M.S. in materials science engineering from Ohio State University. 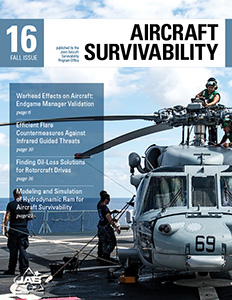