Military rotorcraft structures may be subjected to high-energy ballistic events in combat situations. Ballistic threats characterized by an advancing shockwave created by an explosive blast, alone and in combination with high-speed fragmentation, typically result in significant structural damage for both metallic and composite structures. To address this vulnerability, the U.S. Army’s Aviation Development Directorate (ADD) and The Boeing Company have collaborated to develop and integrate specifically designed composite sandwich components into large primary aircraft structures, which have shown good success at mitigating catastrophic damage caused by explosive ballistic events [1].

The full-scale test article configuration (shown in Figure 1) was designed to be representative of small-volume primary aircraft structure. The assembly consists of a metallic spar, carbon/ epoxy spar box, and fastened doublers that reinforce holes in the spar box. The spar box is made of carbon/epoxy face sheets with crushable core engineered with specific characteristics (strength, density, and yield behavior) to mitigate the explosive blast shockwave. Assembly of the structure is accomplished with riveted fasteners. Test articles (shown in Figure 2) were fabricated with varying spar box laminate definitions, metallic spar configurations, and hole doubler configurations, but with the same core configuration. 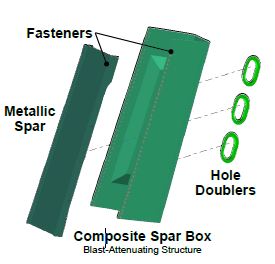 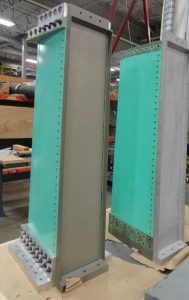 Ballistic testing was conducted at the ADD range (in Fort Eustis, VA) to evaluate the structural response of the full-scale test article when subjected to the pressure environment created by the specified high-energy (explosive) threat. Data gathered during the full-scale test included high-speed video and photography. The objectives of the test were as follows:

Two rounds of ballistic testing were conducted, with the first used to correlate with the analysis. Using data and observations from the first round, the analysis was modified to better represent the pressure environment created from the ballistic threat and improve correlation with the damage observed. The second round of testing (shown in Figure 3) was then executed to demonstrate the accuracy of the improved analysis.

The overpressure environment on the interior of the structure, resulting from the explosive event, was modeled analytically by Boeing (Mesa, AZ) using two approaches: an empirical approach and an Arbitrary Lagrangian Eulerian (ALE) approach. ALE combines both Lagrangian (where each individual node of the computational mesh follows the associated material particle) and Eulerian (where the computational mesh is fixed in space and the continuum moves with respect to the grid) formulations, such that the computational mesh may be fixed in space or move with the continuum. Both analysis methods were executed with the finite element (FE) code LS-DYNA.

The empirical explosive approach defines the pressure environment using curves that are fit to test data. The structure of interest is modeled using the Lagrangian FE formulation, and a unique pressure-time history is defined for every element subjected to the blast. The time histories are defined by peak pressure, pressure pulse duration, and pulse arrival time, which were derived from empirical test data and depended on the charge characteristics and distance between the element and the charge. The explosive source is defined by the user, including location, mass, round casing (if applicable), and shape. The pressure-time-history for an element is calculated as a function of distance from the defined explosive source and user inputs.

For the present ALE approach, the explosive material and air domain are modeled using an ALE formulation while structural components are modeled using a purely Lagrangian formulation. The interaction between the ALE domain and the Lagrangian surfaces is simulated with definitions of Fluid Structure Interaction (FSI). The pressure environment and resulting pressure-time history due to the explosive materials are a function of the resulting FSI.

Due to the complexity of the ALE approach, it is significantly costlier (up to 40 times the simulation clock time) than the empirical model. However, comparison of the approaches resulted in sufficient confidence in the empirical approach for it to be used for correlation with test results. More detail on the analytical models can be found in Andrews et al. [3].

As stated previously, the first round of ballistic testing was used to correlate and improve the analysis. The pre-test damage predictions for the second round of testing were generated with the improved empirical analysis, and they agreed favorably with the damage observed (as shown in Figure 4). High strains, predicted between the aft spar holes and along the inner face sheet of the composite spar box, indicated a risk of moderate cracking. Some cracking at these locations was observed in test. Significant damage to the metallic spar was not predicted and was not evident in test. The only notable damage to the metallic spar was due to cracking between shrapnel penetrations.

Following the ballistic testing, residual strength testing was conducted at the ADD Structures Laboratory (in Fort Eustis, VA) to evaluate the post-ballistic capability of the full-scale test articles. The test setup is shown in Figure 5. Each of the two test articles was fastened to laboratory structure, and test loads were applied by a single actuator to simulate flight loading. Data acquisition included load, strain, and displacement. Strain was measured by four axial strain gauges, two on either side of the test article as shown, to verify the applied loads. Displacement was measured at the upper corners in the lateral direction by string pots on the right-hand side of the test article. 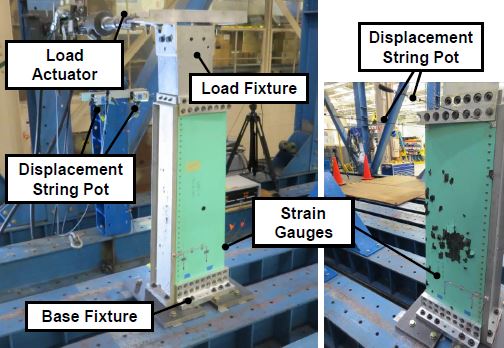 Residual strength FE analysis was conducted on the full-scale test article. Maximum and minimum principal strains are shown in Figure 6 for the composite spar box at design limit loading. Extreme compression strains were predicted to be relatively low. Failure was predicted when the local peak strain at the damage hole reached the materials ultimate compression strain. Running loads were extracted from the analysis for the bays in the metallic spar, assuming crack propagation between shrapnel holes. A panel buckling analysis was also conducted for each of the remaining bays. All pre-test predictions, including failure modes in the composite spar box and metallic spar, predicted no failure during cyclic testing. More detail on the analysis can be found in Andrews et al. [3]. 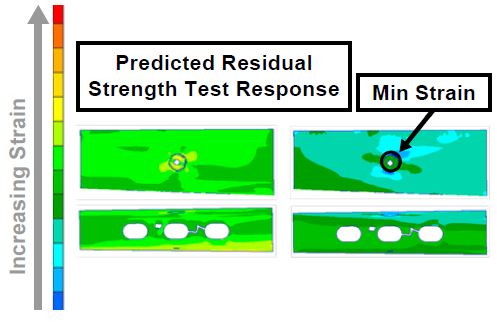 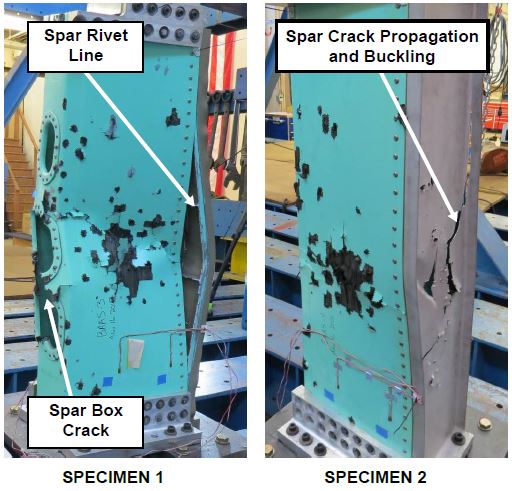 Table 1 Measured vs. Predicted Failure Loads as a Percentage of Design Limit Load 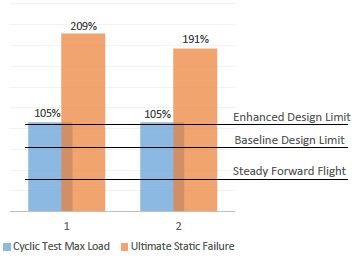 A specifically engineered structural core solution was developed and integrated into a full-scale test article, representative of small-volume rotorcraft structure, for evaluation of ballistic/blast tolerance and residual strength. FE analysis predicted resulting damage and residual strength of small-volume aircraft structure when subjected to a ballistic event. After two rounds of ballistic testing, post-test correlation demonstrated that empirical analysis is suitable to accurately predict structural response and damage modes for ballistic events of this magnitude. Specifically, high strains predicted in the composite face sheets were shown to correlate to cracks resulting from the extreme overpressures. The test articles were then subjected to residual strength testing. Both specimens exhibited cyclic, yield, and ultimate strengths in excess of design requirements, clearly demonstrating the capability of the engineered structural core solution to mitigate the damage due to the ballistic event while contributing to the strength of the candidate rotorcraft structure.

Dr. Mark Robeson is an aerospace engineer with the U.S. Army Aviation Development Directorate. With more than 27 years of research and development experience, he currently serves as a U.S. Army Aviation Missile Research Development and Engineering Center Experimental Developer (designated technical expert), with expertise in aviation structures and vulnerability reduction. He is also active as a structures and materials technical expert in the Joint Aircraft Survivability Program’s Vulnerability Analysis and Reduction Subgroup. Dr. Robeson has a B.S. in mechanical engineering and an M.S. and Ph.D. in engineering mechanics from Old Dominion University.

Mr. Clark Andrews is a mechanical engineer with The Boeing Company. He has 7 years of industry experience, including a multidisciplinary focus on the development of ballistically tolerant structures, aircraft configuration design, and, most recently, production support of drive systems. He holds a bachelor’s and a master’s degree in mechanical engineering from Northern Arizona University and Arizona State University, respectively.

Ms. Lisa Chiu has worked as a structural analyst for The Boeing Company for 10 years, focusing on analysis, simulation, and testing of composite structures. Currently, she serves as the principal investigator for several research and development programs focusing on survivability, durability, and damage tolerance. She is a Boeing designated expert in ballistic structural analysis and ballistic test execution for composite structure. Ms. Chiu holds a B.S. and M.S. in mechanical engineering from the University of Massachusetts Lowell

This research was partially funded by the Government under Agreement No. W911W6-11-2-0014. The authors thank the U.S. Army’s ADD and the Boeing AH-64 Modernization Office for their financial and technical support of this research.