Figure 1 LTC Barrett Performing an Assessment While Deployed in 2013.

The Air Force (AF) component of the Joint Combat Assessment Team (JCAT) has recently experienced some personnel changes. LTC Arild Barrett (pictured in Figure 1), a valued team member for 5 years, retired from the AF on 1 July; and LTC Chuck Larson (pictured in Figure 2), who has been with the JCAT program since 2005 and the Officer in Charge of the AF component since 2011, will be retiring on 1 November. JCAT thanks LTC Barrett and LTC Larson for their service and wishes them well in their future endeavors.

At the same time, AF JCAT has gained two new valuable team members, 1LT Dan Adducchio and CPT Lindsay Cain. 1LT Adducchio transferred from the Air National Guard and has been working for JCAT on the side for approximately 1 year while his transfer paperwork was being processed. On the civilian side, he is Deputy Chief for F-15 Operations at the Air Force Life Cycle Management Center at Wright-Patterson Air Force Base (WPAFB). CPT Cain transferred from the active force and spent her last tour at the Air Force Research Laboratory at WPAFB as a research engineer and an executive officer. In the civilian capacity, she is currently a machine learning engineer at Riverside Research in Beavercreek, OH.

Training continues to be an ongoing JCAT need, and work has been underway to improve the JCAT training area located at WPAFB. JCAT is collaborating with the School of Aerospace Medicine, which manages the site. Currently, the site contains only a wrecked T-6 and C-130 aircraft, although other aircraft—in particular, a rotary-wing asset—are actively being sought. A joint Navy-Air Force JCAT assessment training event was conducted at the site last March, and another is planned for September. This is a great opportunity for the JCAT cadre and others to refresh assessment skills on a regular basis. 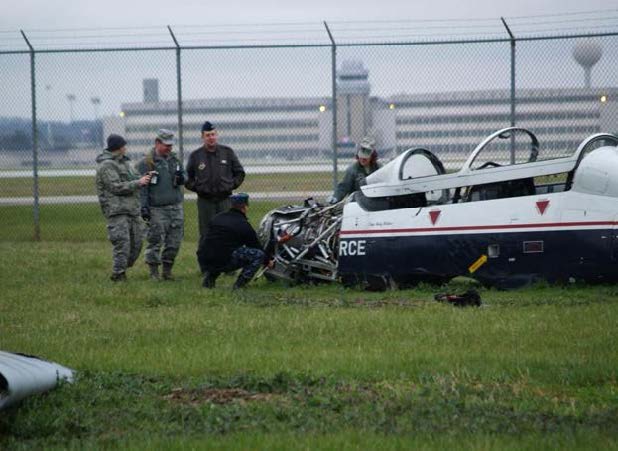 Collectively, the dates for the 2018 JCAT training curriculum have been finalized. Phase I is planned for 22–26 January 2018 at Fort Rucker, AL. Phase II is planned for 5–9 March 2018 at China Lake, CA. Phase III, also known as the Threat Weapons and Effects (TWE) training seminar, is planned for 10–12 April 2018 at Hurlburt Field, FL. More information regarding the TWE will be announced at a later date.

In addition, the AF JCAT has joined forces with the aircraft structural engineering community to maintain a JCAT presence in the area of responsibility. To address the dearth of JCAT capability down range after the withdrawal of assessors from Afghanistan in October 2014, JCAT has to date sent three Depot Liaison Engineers (DLEs) to the JCAT training courses at Fort Rucker, China Lake, and Hurlburt Field.

The great benefit to using DLEs is that they are already trained in aircraft battle damage repair, which includes documenting the hostile fire damage to aircraft, a skill common to JCAT. DLEs operate from several bases, including Al Udeid, Al Dhafra, Ali Al Salem, and Bagram, providing on-site aircraft structural engineering support and depot coordination, as well as JCAT support as an additional duty.

LT Andrew Logan pioneered the combined DLE/JCAT role during his tour and successfully established lines of communication with mishap reporting, maintenance, and safety personnel and in providing JCAT training to the other DLEs. CPT Michael Macchia has now taken his place and continues the standard of excellence. Air Force JCAT intends to have at least one JCAT-trained DLE in theater at all times to respond to any hostile fire incidents.

Though the JCAT mission has been around a long time, it unfortunately is not well known in Air Force circles. To remedy this situation, we are striving to give JCAT orientation briefings as often as possible. In May, LTC Barrett briefed the 10th Air Force Combat Planning Council held at the Naval Air Station Fort Worth Joint Reserve Base in Fort Worth, TX. The audience was composed of intelligence, surveillance, and reconnaissance personnel, who were briefed on the JCAT mission using the EXTORTION17 incident as a real-world example.