While aircraft survivability technology has made significant advances over the years, the United States still relies on self-sealing fuel tank technology that was developed and implemented in the early 20th century. Without a self-sealing fuel cell, a penetration event (e.g., ballistic impact) yielding a hole in the tank can result in fuel leakage, which can decrease the vehicle range and result in an in-air fire. The first successful demonstration of a self-sealing fuel tank reportedly occurred in May of 1927 by the Navy Bureau of Standards. The layered-wall tank consisted of galvanized iron walls with felt, gum rubber, and Ivory soap whitening paste sandwiched in between. By World War II, a more advanced, lighter design was developed and implemented on U.S. military aircraft. This design, which remains largely unaltered on today’s military aircraft, consists of a layer of unvulcanized rubber sandwiched between two layers of vulcanized rubber [1]. Upon penetration by a projectile, fuel flows through the hole, causing the unvulcanized layer to swell and seal the puncture.

In the typical configuration, illustrated in Figure 1, the inner liner material is constructed of Buna-N synthetic rubber, whose purpose is to contain the fuel and prevent it from contacting the sealant, resulting in premature swelling or deterioration of the sealant. Although Buna-N is not affected by petroleum fuels, it is porous, making it necessary to incorporate a nylon barrier to prevent fuel from reaching the sealant. The nylon is often brushed, swabbed, or sprayed in three or four hot coats to the outer surface of the inner liner during construction. 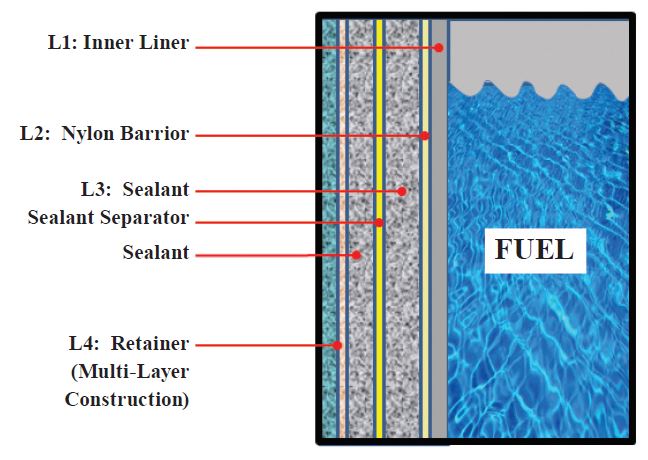 The next layer is the sealant material, which remains dormant until the cell is ruptured or penetrated by a projectile, at which point the sealant will swell to several times its normal size and thereby fill the hole produced by the projectile. This action will keep the fuel from flowing through to the exterior of the fuel cell. The sealant is fabricated from a natural gum rubber, and the chemical reaction occurs as soon as hydrocarbon fuel penetrates the inner liner and reaches the sealant. This mechanism effectively closes the hole and prevents the fuel from escaping.

This design relies on the swelling action of the unvulcanized rubber initiated by contact with a hydrocarbon liquid (e.g., jet fuel). While the rubber will also become “sticky” to the touch from this contact, the sealing action is attributed to the swelling reaction forming a mechanical seal in the hole.

Unfortunately, the ongoing emphasis on weight reduction initiatives for aircraft systems has significantly reduced design margins of affected systems and subsystems (including fuel containment systems) to develop the greatest performance level for the least weight, thereby potentially marginalizing performance. This marginalization has been evidenced through recent testing of current state-of-the-art fuel cells, which have experienced difficulty in meeting their self-sealing requirements while maintaining the required level of crashworthiness. Furthermore, weight reduction of fuel cells that maintains the present levels of crash and self-sealing protection is not possible using currently fielded materials and design approaches.

To meet the expanding needs of current and next-generation aircraft platforms, self-sealing fuel cells are being challenged to meet the following requirements:

While many of these requirements are the same for current self-sealing systems, the challenge primarily lies in the ability to self-seal regardless of fuel chemistry, as well as the ability to perform this function against larger order threats with minimal impact to overall system weight. Because the traditional approach is based on a mechanical seal, it is necessary to ensure that the penetration hole is free of obstructions from the contiguous fuel tank and/or aircraft structure. The use of backing boards and additional structural considerations (foams, structural stand-offs, etc.) contributes to minimization of obstructions (e.g., structure petaling), which would prevent sealing by holding the hole open (as illustrated in Figure 2). 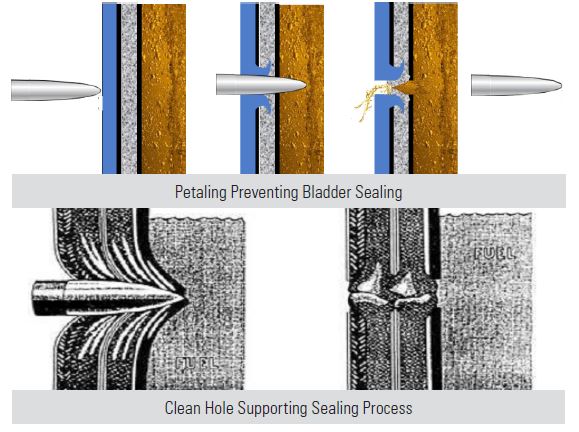 Three approaches being actively developed include (1) variations of the traditional self-sealing mechanism where modifications are made to the uncured rubber to facilitate the sealing process, including formulation and macro-structure changes; (2) replacement of the fuel-activated sealing rubber with a layer of inert gas in which the head pressure exceeds that of the contained fuel preventing expulsion of the fuel across the gaseous barrier; and (3) replacement of the fuel-activated rubber with an expanding adhesive system designed to fill the hole and bond to the bladder material to create an effective seal.

While the first option is still plagued with a reliance on fuel to activate the sealing process, and the second requires the addition of gas generation system(s) with associated plumbing, the third is both independent of fuel chemistry and enhances the mechanical seal with chemical bonding.

The SURVICE Engineering Company has demonstrated the feasibility of this third approach under a Small Business Technology Transfer program (for Integral Self-Sealing Protection) for the U.S. Navy Naval Air Systems Command and a Broad Agency Announcement (for an Advanced Fuel Containment System [AFCS]) for the U.S. Army Aviation Applied Technology Directorate . In addition, the Joint Aircraft Survivability Program (JASP) is currently providing funding to continue the development, beginning with optimizing the design for minimal weight impact and characterizing the effects of environmental conditioning.

The self-sealing technology for the third approach (for AFCS) is a penetration-activated self-sealing fuel bladder, which is not dependent on the contained liquid (e.g., fuel) for activation. This technology provides a faster and more robust self-sealing capability than current technologies. The sealing reaction is completely self-contained and functions independently of fuel or air exposure. The system is lightweight and can be easily integrated into current and new aircraft or ground system designs, including bladder and integral “wet-wing” fuel systems.

The AFCS technology is a multi-layer composite material that incorporates autonomous self-sealing capability through encapsulated liquid reactants that polymerize when mixed. High-elongation polymer layers sandwich the liquid reactants and provide an immediate mechanical seal as they elastically rebound after perforation by a threat. This rapid mechanical response leaves a hole that is much smaller than the penetrating threat’s presented area (as illustrated in Figure 3 for a 12.7-mm projectile).

The interior reactive layer includes arrays of discrete cells wherein two liquid reactants (“A” and “B”) are separately contained in individual polymeric bags. These bags are arranged in a grid pattern for each reactant and assembled on top of one another (as illustrated in Figure 4). 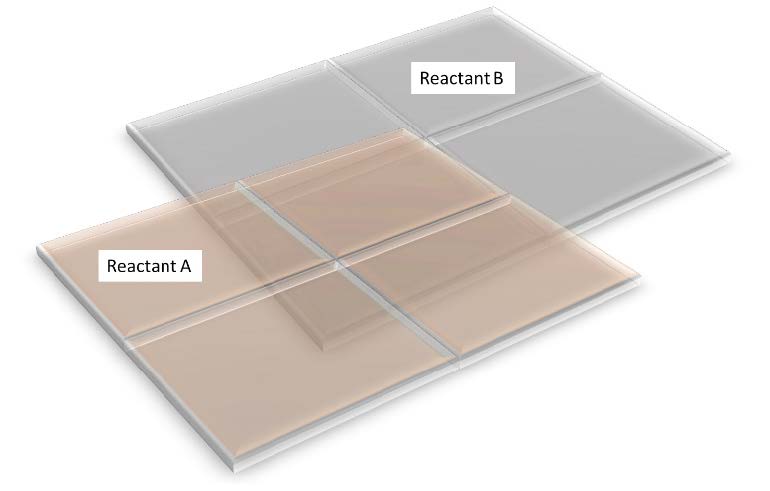 When the threat perforates the nested cell packets, the two reactant liquids mix and rapidly polymerize. The reaction also generates a gaseous byproduct (CO2), which results in a closed-cell polymer foam that expands to seal the damaged area. A schematic of the basic self-sealing function without the structural bladder layers and with the containment bags represented as a single separation layer is depicted in Figure 5.

Integration of fiber reinforcement layers with the composite material complements the self-sealing mechanisms, provides structural integrity, and helps to hold the liquid reactants in place as they polymerize.

Key elements of this design include the following:

This novel design allows the self-sealing technology to function autonomously and completely independent of fuel or air exposure. The composition of fuel contained within is not a factor to the self-sealing effectiveness, regardless of whether it is, for example, a biofuel or JP-8. The seal provided by this design is far more robust and reliable than what is provided by the legacy technologies, which rely on fuel absorption and swelling.

The U.S. Army Research Laboratory designed and fabricated a specialized panel test fixture (shown in Figure 6) to support an iterative design process, thereby permitting an inexpensive test setup to evaluate panel design options prior to construction of a fuel cell test cube. The front face of the stand includes an aperture with a window frame fixture to grip and seal the edges of the panel specimens. The cube-shaped stand is filled with fuel to replicate a fuel containment system configuration, and a ballistic impact is imposed on the exposed panel in the test fixture. 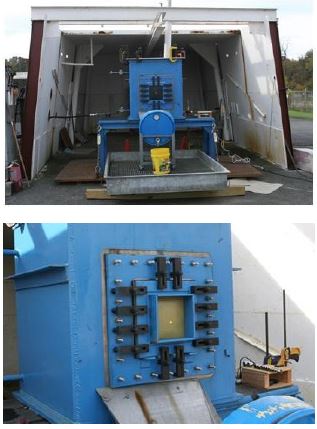 Panel specimen testing provides a rapid and inexpensive way to evaluate a large number of design configurations before committing to the substantial expense and time required to fabricate standard MIL-DTL-27422F gunfire cube specimens. While the results do not exactly replicate the dynamics of a cube specimen test, it is an accurate method to evaluate the self-sealing capabilities of design configurations. Self-sealing performance for the panels is defined the same way it is for a cube, by the following MIL-DTL-27422 criteria:

In the initial round of panel tests, various materials and delivery systems were incorporated in the design for evaluation purposes. The results of these tests, shown in Table 1, demonstrated the ability of the system to self-seal against both a normal and tumbled 14.5-mm AP threat. 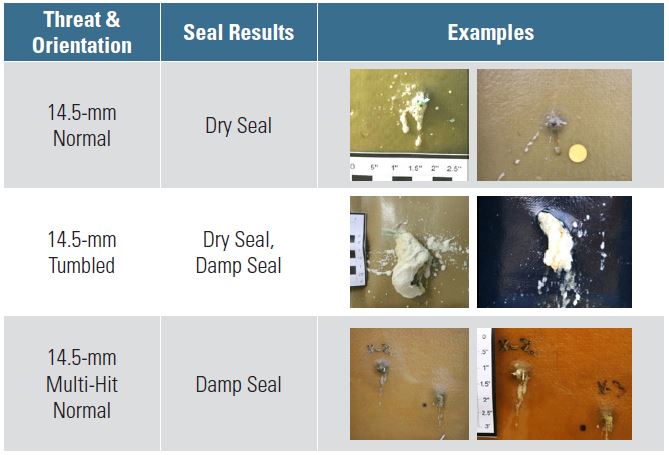 The panel tests were followed with cube test specimens (of two differing reactant delivery systems) for both gunfire and crash testing. The system reliably sealed the entrance and exit wounds created by normally oriented and oblique entry 14.5-mm AP threats. Self-sealing of 14.5-mm AP tumbled events was less reliable for the cube designs and their respective reactant delivery systems, validating the nested square reactant cell arrangement as providing the most efficient reactant delivery system for this technology. The test also identified material modifications to improve system effectiveness and reliability. In addition, results of crash testing identified weak areas of the basic bladder design, requiring enhancement. These tests were conducted in accordance with MIL-DTL- 27422F and included both a rigid test fixture (shown in Figure 7) and sling test configuration (shown in Figure 8). While results of the crash tests identified areas around installed fittings that required improvement, the base reactant system design did not adversely impact the cube performance during the crash event.

Test results of the self-sealing fuel bladder confirmed the design effectiveness viability and identified key contributing features necessary to proceed with design optimization and reliability enhancement. Based on these factors, a JASP program was initiated to advance the design and enhance its Technical Readiness Level to a level that could support platform integration. This program consists of panel optimization tests, environmental conditioning tests, and manufacturing integration.

Design areas being addressed include (1) the use of reactant cell material to block ultraviolet and water diffusion that could impact reactant reliability over time, (2) reactant cell encapsulation with elastomer(s) to minimize penetrator induced hole size, (3) improvement of bond integrity between inner and outer bladder layers with the reactant cells and bladder fittings, and (4) enhancement of the integrity of seals with reactant packets to mitigate premature release of reactants during handling.

With some of these improvements implemented on test panels, the system has demonstrated dry seals against the 14.5-mm projectile impact at a normal orientation (shown in Table 2).

Additional panel tests are planned to address the 14.5-mm tumbled threat and access the impact of thermal conditioning to the functionality of the self-sealing mechanism. Upon completion of all panel tests, gunfire and crash test cubes will be fabricated for design validation testing of the improved fuel bladder self-sealing crashworthy system. The next series of tests is planned to begin this year.

Mr. Harry R. (Rick) Luzetsky is a subject-matter expert with the SURVICE Engineering Company. He has more than 38 years working in helicopter research, development, and enhancement, including 28+ years in survivability- and composites-related issues. He currently supports the U.S. Army Evaluation Center in live fire test and evaluation (LFT&E) and is involved in developmental programs that target vulnerability improvements for helicopters, including autonomous self-sealing fuel bladders. 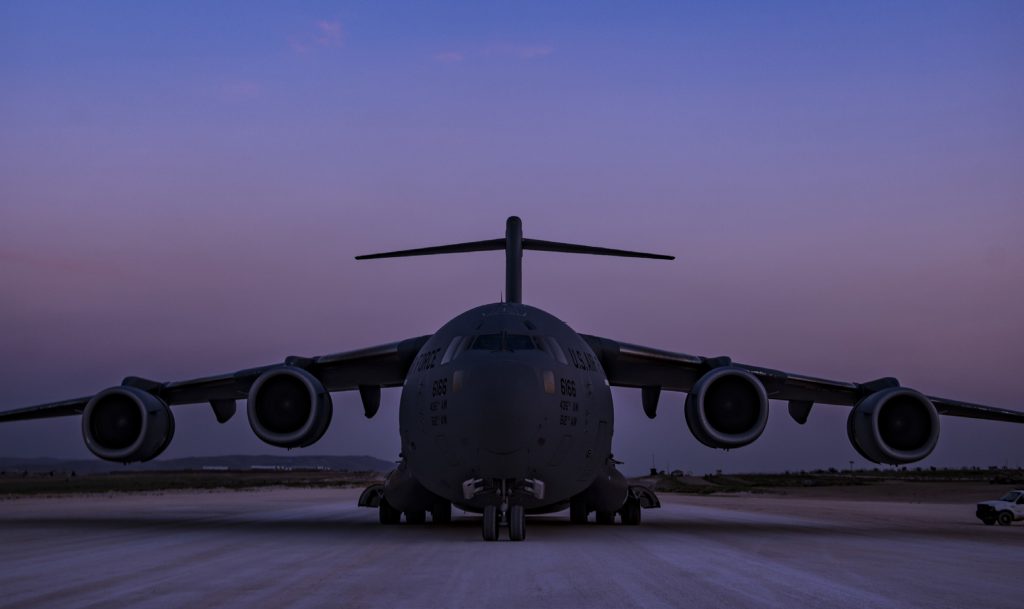