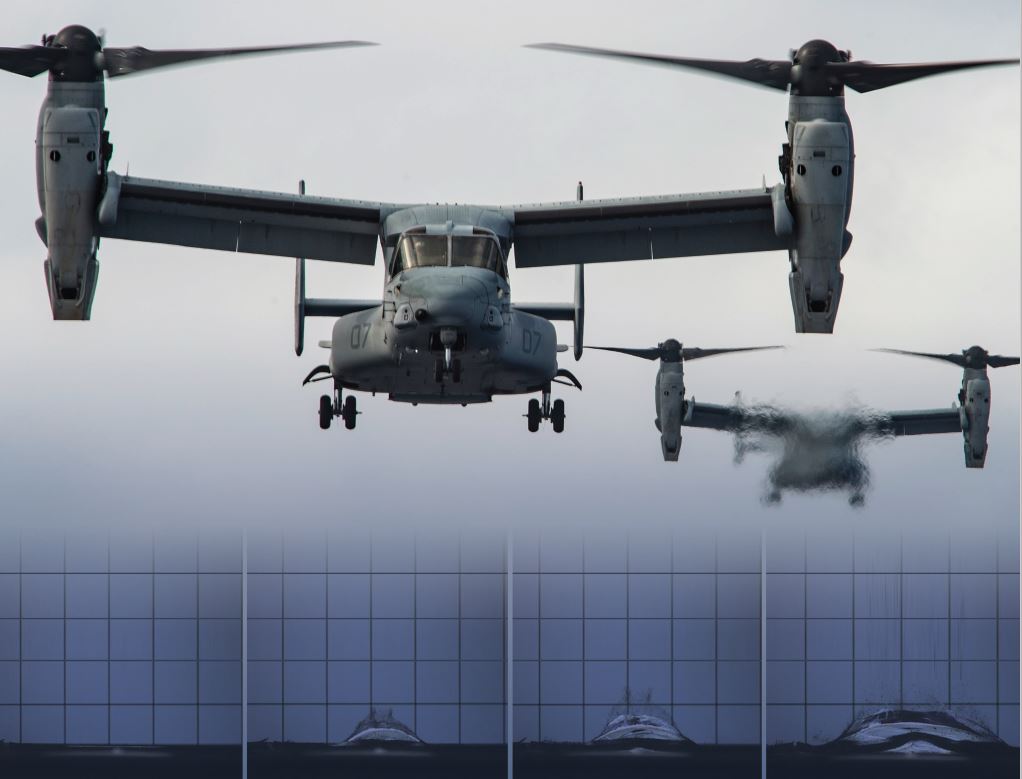 An article in the summer 2015 issue of Aircraft Survivability discusses the successful rapid development of the Advanced Ballistic Stopping System (ABSS) armor developed by The Protection Group (TPG), in conjunction with the U.S. Army Aviation Development Directorate, the Applied Aviation Technology Directorate, the U.S. Naval Air Systems Command (NAVAIR), and the Special Operations Command. The development was achieved in 180 days, a truly remarkable accomplishment in today’s acquisition process. The 2015 article details how the ABSS armor uses an ultra-high-molecular-weight-polyethylene material that meets strict requirements set forth by the Combat Mission Need Statement (CMNS) in support of CV-22 troop protection. Under the CMNS, the material went through a rigorous verification and validation test series, which included environmental qualification, ballistic qualification, material property characterization, and structural stress analysis.

During the ballistic test series, coupon panels were subjected to impacts at various obliquities, in high and low temperatures, and after being exposed to various fluids. This panel testing concluded that the armor system performed better than the specified standard given, while also providing the lightest system the Department of Defense (DoD) had ever produced at the time.

Production panels were tested as well, but they were evaluated only to verify that the material system and attachment methods met the ballistic performance parameters while attached to an aircraft-representative structure.

To address these knowledge gaps, a project was funded by the Office of the Secretary of Defense, Director, Operational Test & Evaluation, Live Fire Test & Evaluation for Joint Live Fire. In early 2016, NAVAIR’s Weapons Survivability Laboratory (WSL) at China Lake, CA, performed testing of this system. The test series was split into two phases, allowing the armor system to be evaluated fully.

The first phase evaluated 15-inch by 15-inch armor coupon panels (shown in Figure 1) against multiple impacts at multiple obliquities. This phase took a closer look at the effects on performance that obliquity and multiple impacts have on the armor system not originally evaluated. 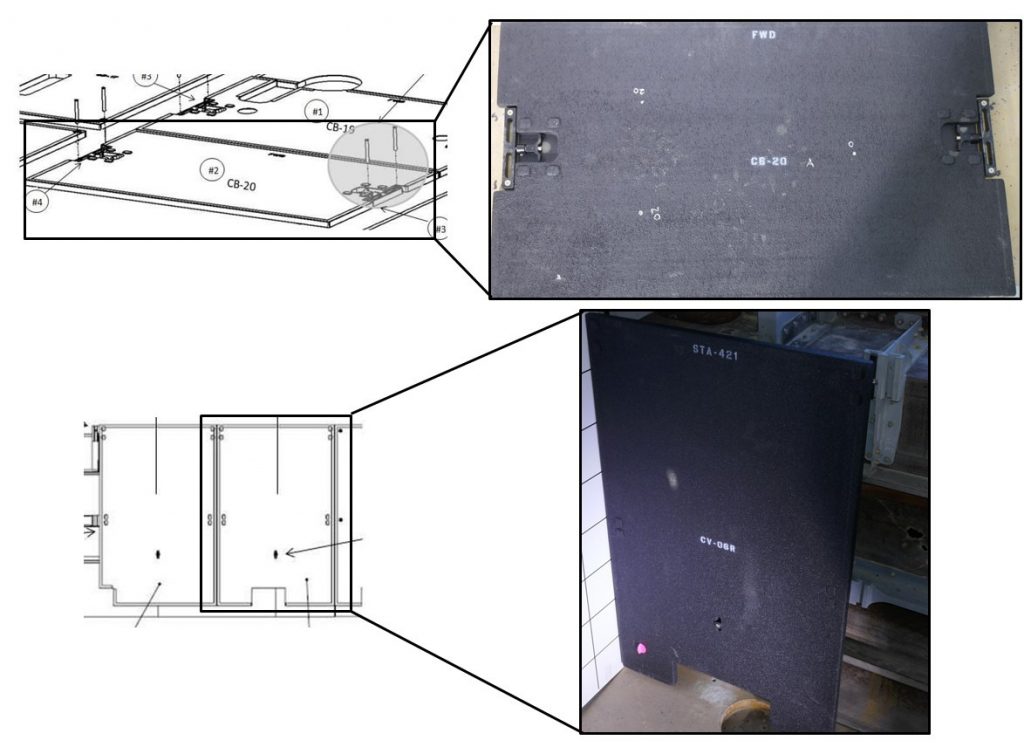 The first phase of this test series was performed in WSL’s underground, environmentally controlled gun tunnel (shown in Figure 3), which is suited for conducting live fire testing of panel-sized components. Thirty-seven ABSS coupon panels were ballistically evaluated in both the “uninstalled” and “as-installed” test setup configurations. 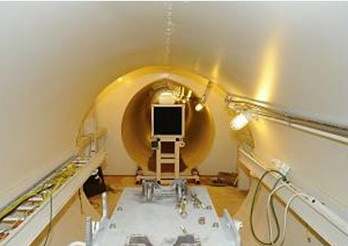 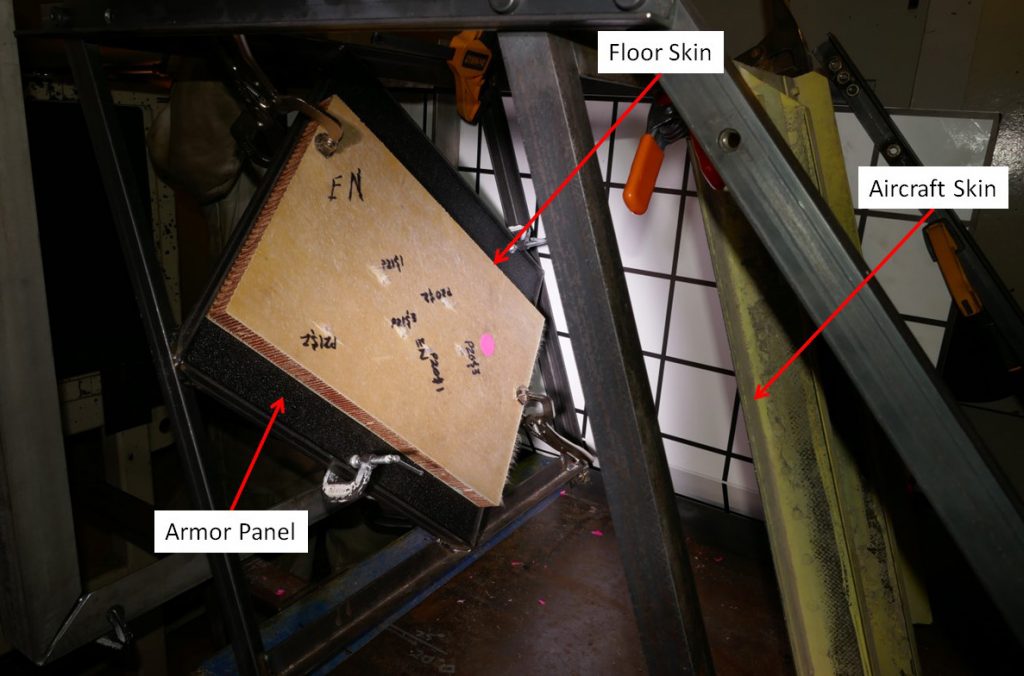 Each armor panel was subjected to a maximum of three fair impacts (i.e., impacts into the armor with little to no tumble) to evaluate the armor’s multiple-impact performance. Each 15-inch by 15-inch armor coupon panel was evaluated against the following test criteria:

Phase I was successful in filling the knowledge gaps discovered during developmental testing. Data analysis uncovered that the performance of the armor system increased over all obliquities when impacted multiple times vs. single impacts at the same obliquity.

An additional increase in performance was also witnessed when in the as-installed configuration using both V-22 aircraft skin and floor panels. Perhaps the most surprising result was how well the armor performed when impacted 1 inch from the armor’s edge.

The second phase of this test series was completed at WSL’s Atkinson Test Site. This test facility’s gun tunnel, which runs along the length of the test pad, allowed for ease of testing for floor panels as well as wall panels, even at obliquity (see Figure 5).

These panels were production-representative and were installed in the aircraft as they would be when in flight. The test shots on these panels were intended to evaluate the armor panel’s ability to stop the threat at the given specification velocity while taking into account the panel’s unique geometry.

The production panels were tested against the following criteria:

Phase II testing improved the understanding of the production armor’s ballistic stopping performance. Because some panels are different shapes and sizes than others (based on the layout of the aircraft), it is important to fully understand how different parts of the armor system and aircraft installation will perform against the given threats. This phase was an important step in characterizing the ballistic performance of these armor panels.

Phase I testing demonstrated the ABSS system’s outstanding performance against multiple hits, along with impacts at the edges and when installed in the CV-22 aircraft configuration. In addition, a deeper look uncovered a potential increase in performance at data points previously tested during developmental testing.

Overall, the ABSS armor system performed above and beyond specifications when installed in the CV-22 cabin configuration; and the system is an example of how the military, DoD, and private industry can produce a dependable, high-quality system within a short period of time to protect the Warfighter in an ever-evolving threat environment. For a more in-depth review of this test series, the full report can be found on the Defense Technical Information Center website (http://dtic.mil/dtic/).