The Joint Combat Assessment Team (JCAT) has remained steadfastly committed to training and equipping combat assessors for worldwide deployment so that they can evaluate aviation combat damage incidents, assess the threat environment for operational commanders, and collect data to support aircraft survivability research and development. Ultimately, we strive to improve the survivability of our Warfighters and weapon systems.

Since our last update, the joint team has been busy completing phase two and three of our three-phase process to certify new JCAT assessors. The Navy hosted phase two at the Naval Air Warfare Center in China Lake, CA, the week of 5 March. The phase two course is designed to build upon the student’s phase one training with additional classroom-based training, threat education, simulated field-based events, and event report-outs. The competency shown by this year’s class was impressive, with each member performing numerous assessments on a variety of aircraft platforms that had multiple weapon system effects in an environment representative of locations in Iraq and Afghanistan.

After phase two, we focused on phase three, our annual Threat Weapon & Effects (TWE) Training. The Army hosted this year’s event at Hurlburt Field, FL, in April 2018, training more than 160 attendees. The training draws information from threat exploitation, live fire testing, and combat experience to provide a complete picture on threat lethality. Briefings were conducted each day by subject-matter experts across the Department of Defense (DoD), intelligence, industry, and operational communities. The live fire event was conducted on the Eglin AFB test range and included various weapons targeted at aircraft and aircraft components.

The event provided a rare opportunity for the attendees to gain exposure to threat munitions/missiles, test articles, and damaged aircraft components. Figure 1 shows an example of the effects of hydrodynamic ram on an aircraft structure, which attendees were able to inspect on the range. 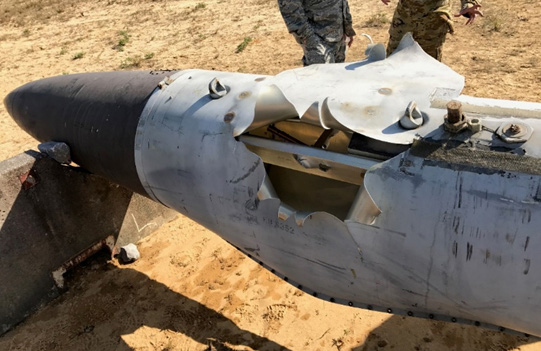 The entire team would like to thank all of the briefers from across the DoD who dedicated their time and support to make this year’s event a success. The informative briefs were insightful and helped educate DoD agencies and industry on current efforts to make our aircraft more survivable. Additionally, the team would like to thank the entire Eglin AFB Range Control team for their perseverance with scheduling and support during the range time.

While on station, JCAT was also fortunate to be able to divert to Tyndall AFB and spend some time with the 82nd Aerial Targets Squadron, where we inspected a QF-16 that experienced an in-flight weapon strike (see Figure 2). A special thank you goes to Lt. Col. Matt Garrison for hosting our team and providing valuable insight to this important mission.

Finally, the Army, Air Force, and Navy teams participated in a joint training weekend at Wright-Patterson AFB to focus on a variety or programmatic, team-building, and training exercises, along with a capability review with supporting elements. Highlights of the weekend include meeting representatives of the Air Force Research Laboratory to review capabilities they provide for event analysis, touring the Defense Systems Information Analysis Center and the test range to review live fire testing capabilities on aircraft structures, and performing two threat weapons effects analyses on simulated downed aircraft. In addition, while together, we finalized our annual programmatic review, revised the JCAT Standard Operating Procedure, and established plans for FY19.