An Aircraft Fire Hazards, Protection, and Investigation course is being held from 30 October though 1 November in Woburn, MA. The 3-day course, hosted by BlazeTech Corporation, will cover a wide range of issues associated with fire and explosion hazards on commercial and military aircraft, including fundamental concepts, initiating events and evolution, systems survivability, design issues, protection methods, and forensic implications. Specific topics will include:

On 12–14 June, more than 100 model users, developers, managers, stakeholders, and other aircraft survivability practitioners gathered at the Air Force Institute of Technology (AFIT) at Wright-Patterson Air Force Base, OH, for the 2018 Joint Aircraft Survivability Program (JASP) Model Users Meeting (JMUM). This year’s meeting, hosted by JASP and administered by the Defense Systems Information Analysis Center (DSIAC), marked the 20th year of the gathering, as well as its highest attendance to date.

Originally called “DEAFCRAB” meetings (which reflected the names of the models discussed there—DREAM, ESAMS, ALARM, FASTGEN, COVART, RADGUNS, AJEM, and Brawler), the event was renamed “JMUM” in 2003. The purpose of the JMUM is to bring together community members to share insights and lessons learned and to discuss the latest developments and updates of JASP-sponsored and other models used throughout the aircraft survivability/vulnerability industry.

Topics for the JMUM plenary session included the following:

In addition, the meeting included 2 days of breakout sessions to provide more focused information and discussions for the Surface-to-Air, Air-to-Air, and Survivability/Lethality Model Groups, respectively. Topics for these sessions are shown in Table 1.

For more information about the 2018 JMUM or to find out about future meetings, contact DSIAC’s Alfred Yee at alfred.yee@dsiac.org. 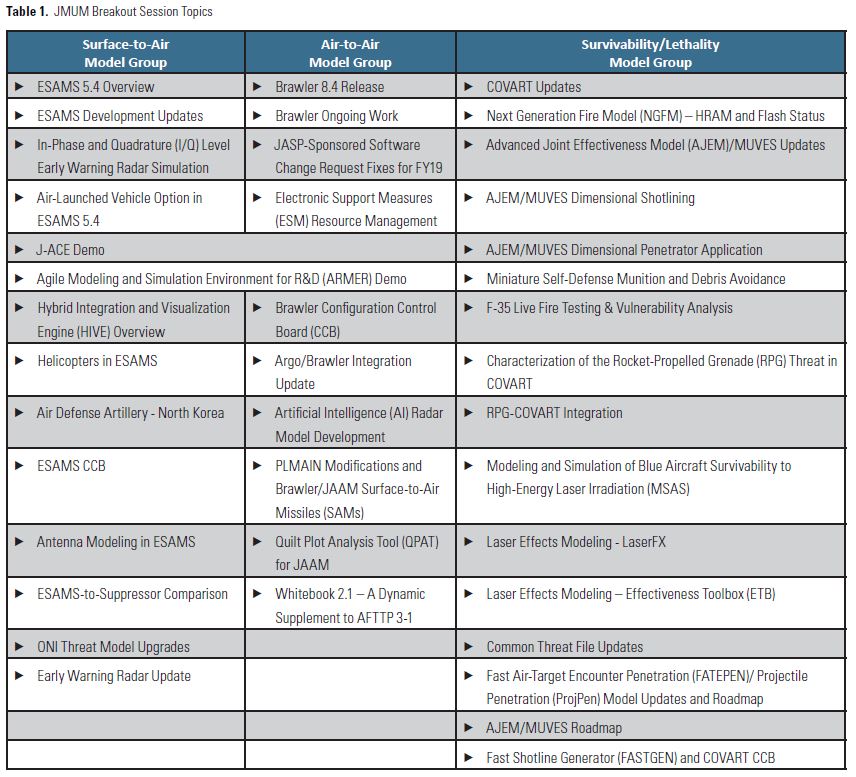