Figure 1. Build It, Load It, Dispense It—The JECM IPT Is Involved in All Aspects of Aircraft Expendable CMs, Including Requirements, Development, Testing, Safety, Security, and Procurement.

The JECM IPT has enabled the Services to combine and optimize efforts on production, development, and testing, ultimately resulting in more consistent Service requirements, reduced costs, and improved CM performance. The success of the team is epitomized by its consistent growth in membership, adaptability to current issues, and successful coordination between industry, the Government, and the Warfighter. The JECM IPT is truly making a difference.

FORMATION OF THE JECM IPT

The year is 2004.  America is leading the Global War on Terror, and Operation Iraqi Freedom is less than a year old. Hostile man-portable air defense systems (MANPADS) are engaging our forces, and aircraft losses are highlighting a critical need for improving protection against these threats to save American lives and complete the mission.

At the same time, the joint Air Force/Navy Advanced Strategic and Tactical Infrared Expendables (ASTE) program was ending, and each Service found itself working separately on new CM development and, in some cases, even paying vendors for the same tasking. Urgently needed was a better way for the aircraft expendable community to communicate on a routine basis and avoid duplication of efforts.

Enter Mr. Tommy Sanders (Navy), Mr. Rene Medina (Army), and Mr. Pete Stoddard (Air Force). Using their initiative and old-fashioned elbow grease, the Joint Flare IPT was formed in May 2004, with an initial attendance of 23 people. Subsequently chartered by each Service in 2006, the team changed its name to the “JECM IPT” to illustrate its growth beyond flares and into all aircraft CM expendables. The team’s vision was simple: provide the best expendable CM solutions to the Warfighter in the shortest amount of time.

As stated in the founding charter, the specific objectives of the JECM IPT are to:

Focused on aircraft expendables due to their unique size, weight, and dispenser constraints, a key component of the early JECM IPT years was addressing new covert flares fielded by the Air Force, Army, Navy, and Special Operations Command. More than a decade later, the charter is still applicable, but the JECM IPT has evolved to include expendable radio frequency countermeasures (RFCMs) and an increasing emphasis on CM dispensing systems, modeling and simulation (M&S) efforts, and technique development. 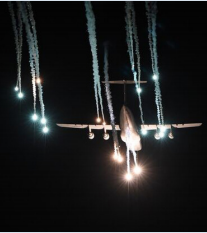 Figure 2. A C-5 Ejects Flares Over Eglin Air Force Base.

The major topics of each JECM IPT include:

These topics may be further broken down into different briefings on particular subtopics. The intelligence community also provides a significant contribution through the latest threat briefs and access to subject-matter experts. Other topics periodically included are the vendor Internal Research & Development (IRAD) briefs and Flare Safety Council meetings. Held approximately every 18 months, Flare Safety Council meetings focus on safety issues regarding the production of CMs.

In addition, the JECM group has been extremely active in both coordinating and supporting test events. Some tests series last for a month or longer, with testing occurring nearly every night. These events may have helicopters, fighters, bombers, and transport aircraft making multiple passes and collecting data against multiple seekers and other types of instrumentation. As such, every JECM meeting includes discussions and planning for upcoming flight test events, including, more recently, international (i.e., NATO) test events. Coordination of the schedules starts more than 6 months prior to the actual testing to ensure CMs, aircraft, test equipment, seekers, and personnel are available to maximize the value and efficiency of the testing.

The JECM IPT is open to Department of Defense (DoD) (military and civilian) and DoD support contractors interested in helping to protect aircraft from surfaceto-air and air-to-air threats. Typical attendees are involved with the design, development, production, and testing of CMs. Contractors that produce CMs are also routinely invited to brief their IRAD funding efforts and other relevant company-specific information (e.g., tooling updates and safety improvements).

The JECM IPT has achieved much of its success through close cooperation among the Services to advocate and work toward common expendable CM capabilities. This close cooperation has entailed harmonization of Service requirements to leverage procurement buys and support sustainment of the industrial base. It has brought industry, Government, and the Warfighter together in a forum effectively leveraging expendable development/production programs to standardize product lines and lower costs, and it has provided a focal point for aircraft expendable testing. This has resulted in significant cost savings across numerous efforts, especially for the Joint Strike Fighter.

The JECM IPT is instrumental in coordinating updated/upgraded test capabilities to allow all Services to evaluate CMs. It provides the aircraft survivability equipment (ASE) community with an opportunity to discuss M&S, verification and validation issues, and development of new CM and/or flare patterns. Shared scheduling maximizes test asset utilization, thereby reducing costs to move test equipment unnecessarily. In addition, development of common testing and data interpretation procedures or methods allows for comparison of different CM types and patterns across the Services. The tri-Service flare database is an example of the JECM IPT assisting programs with a joint database of flares available across the Services.

The JECM IPT also leads efforts to develop joint Security Classification Guides (SCG) to support both IR and RF expendable CM efforts. In the past, each Service used its own CM flare SCG, and these different documents often did not agree. A Joint Flare SCG was thus coordinated between the Services so that now, during a combined flight test, data are handled consistently at the same security level regardless of which Service is dispensing CMs. A Joint RF Expendable SCG is currently under development.

As for the future, the expendables community will continue to develop new types of expendable CMs to address emerging threats, while also continuing with existing designs to address the fielded threats that are already prevalent. These efforts will include the Navy’s round-to-square common carriage conversion, as well as a continued push toward more common solutions between the Services and potentially our NATO counterparts.

The JECM IPT will be at the forefront of these efforts and looks at expanding its vision. Potential new areas of interest include an increasing emphasis on dispenser systems (e.g., ALE-47), consideration of the situational awareness (e.g., missile warning system and radar warning receiver) aspects of deploying CMs, and synergy with other CM systems, such as laser directed energy infrared countermeasures (DIRCMs).

Congratulations to the JECM IPT for their excellence in survivability and for their ongoing efforts to protect the U.S. Warfighter.

On a final note, JASPO would like to wish fair winds and following seas to Mr. Tommy Sanders on his imminent retirement from the Government after nearly 47 years of service. His experience and friendship will be greatly missed.

Mr. Robert Lyons is the Technical Director for JASPO. He has been a member of the aircraft survivability community for more than 30 years. He first served as a Navy test engineer, where he was responsible for Joint Live Fire (JLF) testing on the F/A-18A. He next transitioned to the Air Force at Edwards AFB, where he was the lead survivability flight test engineer for the B-2A stealth bomber. After a detour to San Diego to lead a Navy surface ship communications intelligence program for a time, he found his way back and joined JASPO, where he has held the positions of Technical Director, JLF– Aircraft Systems Test Director, and Susceptibility Assessment and Reduction Deputy Program Manager. Mr. Lyons holds a B.S. in general engineering from the University of California, Los Angeles. 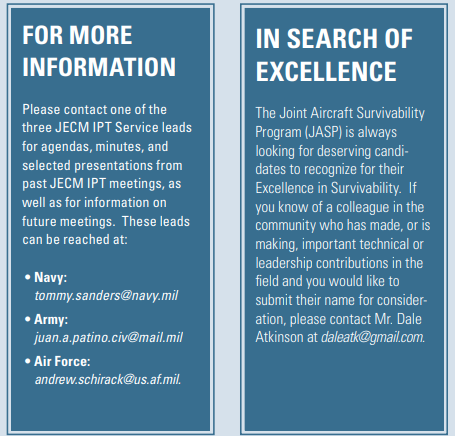 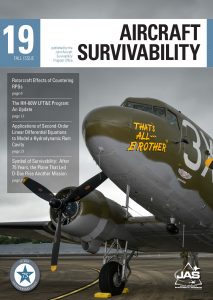