By Neil Berg and Stephen Rosencrantz 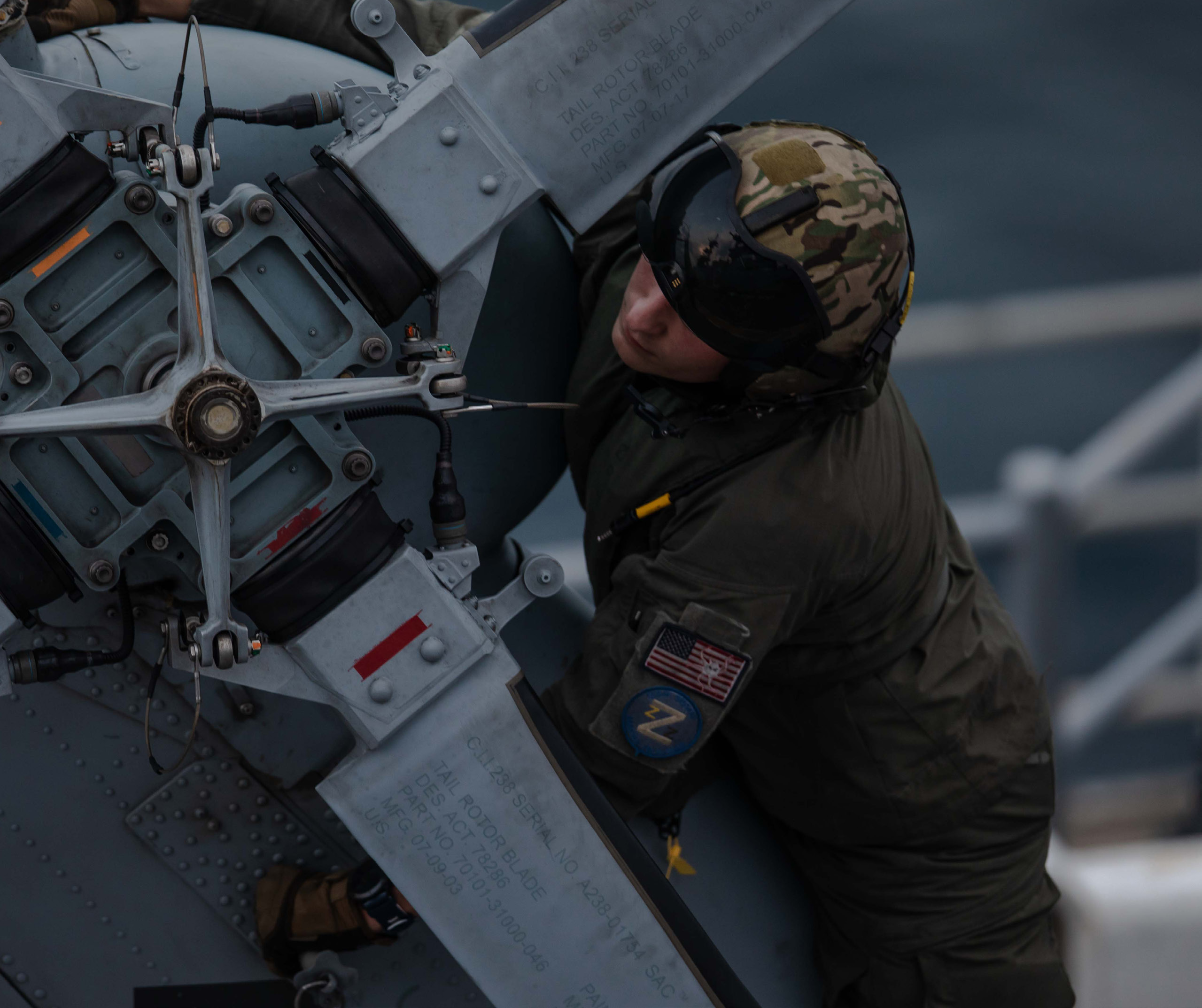 Historically, live fire tests have been used to analyze structural vulnerability for a number of different aircraft. These tests require expensive physical test articles, which can be time-consuming to obtain and are often usable for only a limited number of tests. Therefore, structural live fire test programs usually consist of a small number of damage events (threat/shotline combinations).

More recently, structural live fire test data have been supplemented with data from high-fidelity finite element analysis (FEA) simulations. While these simulations and analyses have been helpful in filling some data gaps and validating a handful of live fire tests, they are also time-consuming, often taking weeks or months to set up. And the data set they provide is limited, requiring a fair amount of engineering judgement to generalize results to other locations and threat/shotline variables.

In addition, understanding the structural vulnerability of modern aircraft often requires an understanding of the effects of many damage events and needs to account for propagating damage and dynamic loading. But to date, there has not been an effective tool to adequately address these requirements.

To reduce the time and effort needed to understand the structural vulnerability of aircraft, and to help fill the data gaps, Skyward, Ltd. has been developing the Rapid Structural Vulnerability Toolkit (RSVT). RSVT enables analysts to rapidly determine the residual strength and even time-to-kill of damaged structures, including fixed-wing and rotary-wing aircraft, while taking into account damage propagation and dynamic loads.

RSVT represents a vast improvement in speed over traditional residual-strength analyses. As mentioned, high-fidelity simulation can take days or weeks to set up and run, while live fire tests can take even longer. Conversely, the toolkit provides the capability to simulate thousands of damage events per hour. It also has the versatility to run on Windows, Mac, and Linux and is scalable from a laptop to a supercomputer.

RSVT has been developed over the past few years with help from both a Small Business Innovation Research (SBIR) project and a Joint Aircraft Survivability Program (JASP) project. SBIR efforts have focused on developing the tool, while the JASP project has focused on demonstrating the capabilities of RSVT and developing strategies for using RSVT output data in standard Department of Defense (DoD) vulnerability tools, such as the Advanced Joint Effectiveness Model (AJEM) and the Computation of Vulnerable Area Tool (COVART).

RSVT is applicable to a variety of use cases. The basis of the toolkit is the use of beam theory to rapidly apply loads and propagate damage. As a result, RSVT is applicable to beam-like structures, which includes almost every part of an aircraft (such as wings, tails, and fuselage), some sections of a helicopter (such as tail booms and rotor blades [shown in Figure 1]), and even buildings and bridges. In addition, RSVT can apply damage effects such as failure, deformation, and thermal damage from a variety of military threats (such as blast, penetration, fire, hydrodynamic ram, and directed energy weapons), as well as nonmilitary threats (such as bird strikes and unconstrained engine debris).

Figure 1. The Applicability of RSVT to Beam-Like Structures, Such as a Helicopter Blade.

The toolkit can be used in several ways. The most common use is performing vulnerability assessments (illustrated in Figure 2), which involve applying damage along thousands of shotlines to generate residual strength or probability of component dysfunction given a hit (Pcd|h) data. The resulting data can then be used with systems engineering, vulnerability, or wargaming tools. 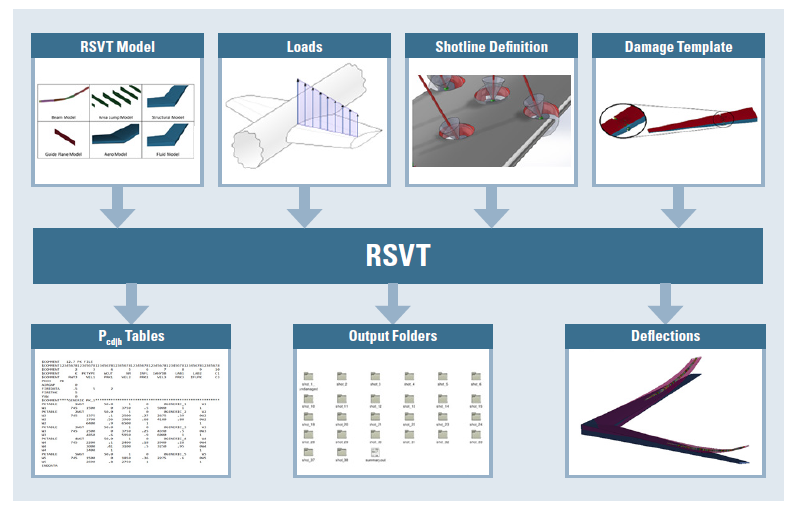 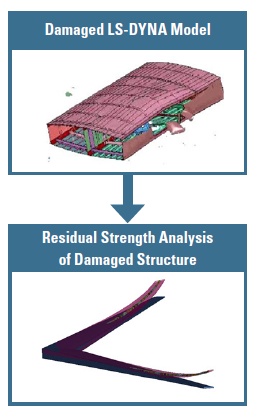 RSVT can also be used to set up high-fidelity FEA simulations (illustrated in Figure 4). This use case can be particularly helpful when analyzing the results of a structural vulnerability assessment conducted by RSVT. The results of the RSVT structural vulnerability assessment may point out damage events of interest. These events can then be turned into matching LS-DYNA simulations for in-depth analyses. 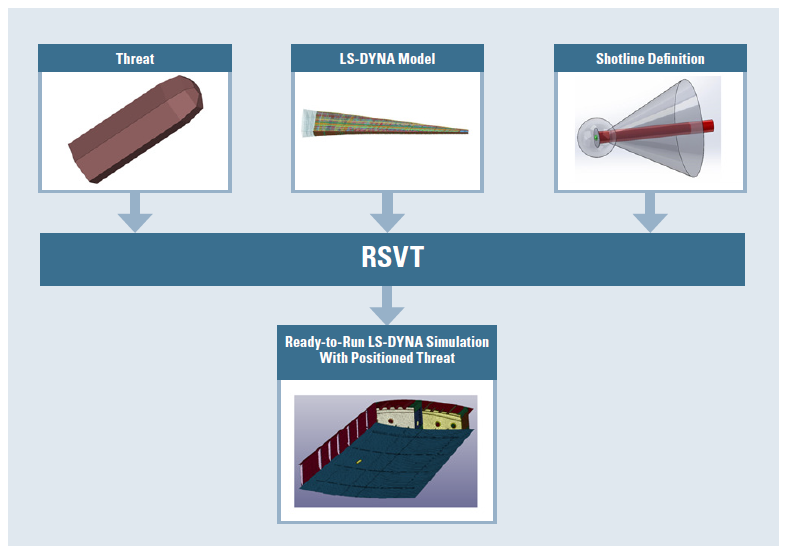 As the DoD moves toward a digital engineering environment, it is important to account for structural vulnerability throughout the design cycle of the aircraft (illustrated in Figure 5). RSVT helps to realize this goal, as all of the aforementioned use cases allow structural vulnerability assessments to be performed much earlier in the design cycle of an aircraft than previously possible. An analysis using RSVT can help discover structural vulnerabilities present in a design before the concept moves to low-rate initial production (LRIP). This capability could thus enable improvements that could lead to safer, more survivable aircraft, designed at digital engineering speeds. 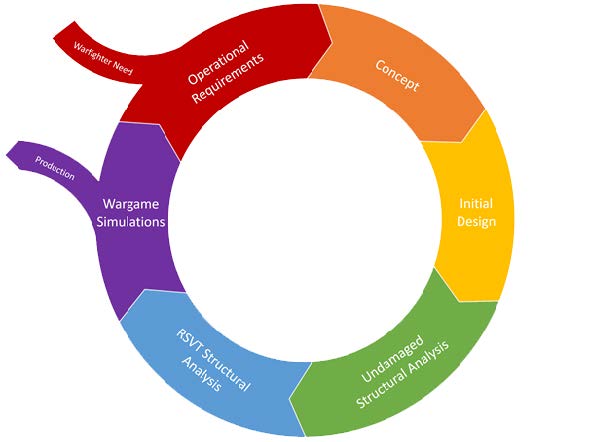 As mentioned, RSVT takes advantage of beam theory principles to rapidly apply loads and propagate damage for beam-like structures (a structure whose cross section is small compared to its length). Four inputs are required to run a structural vulnerability analysis: (1) the RSVT model, (2) shotlines, (3) a damage template, and (4) the flight loads. For each shotline, RSVT applies damage to the RSVT model, then propagates the damage by incrementing the loads.

RSVT uses a custom model to apply the loads and propagate the damage for a damage event. The RSVT model can be automatically generated using shell models, such as those used in traditional high-fidelity FEA tools.

Three shell models can be imported to create the RSVT model: (1) the structural model, consisting of all the structural members; (2) the aerodynamics model, consisting of the aerodynamic surfaces (for computational fluid dynamics [CFD]); and (3) the fuel model, defining the extents of the fuel location. An example of these shell models is shown in Figure 6. The shell models, along with other user inputs (such as material properties), consist of everything needed to automatically generate the RSVT model. This RSVT model can then be used as input to the various RSVT run modes.

Shotlines can be easily described using the records available in RSVT. The shotline parameters can be split into two groups: (1) the target, and (2) the threat. For the target, the parameters include target orientation (direction of gravity) and fuel level. For the threat, the parameters are the orientation (azimuth and elevation), velocity, and the impact location. The available shotline records allow users to quickly specify anywhere from a single shotline to millions of shotlines in a matter of minutes.

Under the JASP project mentioned previously, four damage templates are under development, each representing a different ballistic threat. These templates were generated by using available live fire test data and high-fidelity simulations to develop a description of the damage caused by each threat applied along any shotline. A comparison between a damage template and the damage caused during a live fire test is shown in Figure 7. The damage templates for each of the four threats considered for this JASP effort compare well with available test and high-fidelity data.

Current development efforts are under way to improve damage template creation, by adding a machine learning (ML) process, which involves training using live fire test and high-fidelity simulation data. This ML damage template will be able to apply the damage for a specific threat without relying on the user to have in-depth knowledge of the potential damage. Damage templates provide a rapid method to apply damage to the structure, allowing users to run RSVT at a rate of thousands of shotlines per hour.

Loads can be easily specified and applied to the shell elements of the RSVT model or, in the dynamic case, can be automatically calculated using paneling method CFD tools. RSVT can represent aerodynamic loads, fuel and/or structure weight, and even mass from, say, engines or other structures attached to a wing. The loads can also be applied in both the static and dynamic run modes.

As shown in Figure 8, RSVT provides a wide range of outputs. The results from each shotline/damage event include stresses, strains, and margins of safety, as well as deflections, residual strength, time-to-kill, and probability of kill. These outputs can be used to explore areas of interest on the structure and perhaps inform shotlines that would be interesting for live fire testing or high-fidelity simulation. Additionally, by the end of the current development efforts, there will be a strategy for the implementation of RSVT results into DoD vulnerability tools, such as AJEM and COVART, as well as the Endgame Framework. The outputs from RSVT allow users to fully analyze their aircraft for structural vulnerabilities much earlier in the design cycle of the aircraft. 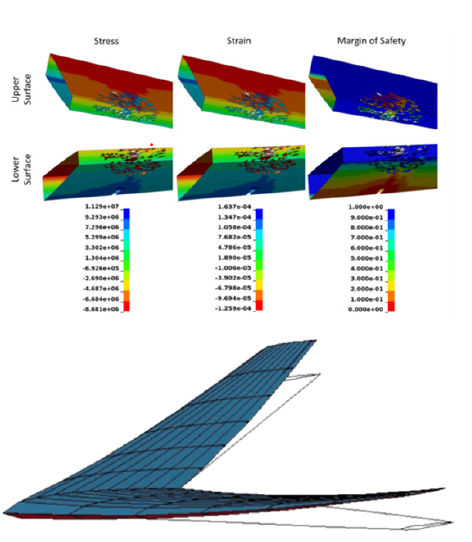 The development of RSVT began with the previously mentioned SBIR contract, including Phase I and II efforts. These efforts helped to develop the groundwork for RSVT, resulting in a toolkit of software algorithms that could rapidly determine residual strength of damaged structures and could be run using a command-line interface.

Current efforts to enhance RSVT include more SBIR development and the JASP project. The result of the SBIR efforts will be a fully functioning RSVT, including a command-line interface and a graphical user interface that can determine both residual strength and time-to-kill for damage structures. This effort will also include improvements to a variety of the features in RSVT, including additional material models, advanced failure modes, and dynamic loads in supersonic, hypersonic, and even rarified atmosphere.

The goals of the JASP project are to demonstrate the capabilities of RSVT and to develop a strategy to leverage the results of an RSVT analysis in DoD vulnerability tools, such as AJEM and COVART.

These efforts are expected to continuously enhance the toolkit to rapidly determine residual strength and time-to-failure of beam-like structures and to further demonstrate its capabilities. And while the capabilities of RSVT are certainly not a replacement for live fire tests and high-fidelity FEA, they promise to be an increasingly valuable component in improving the knowledge gained from traditional structural analysis methods and higher-level simulations and in filling in the remaining data gaps that can result from time and/or budget constraints.

Mr. Neil Berg is an engineer at Skyward, Ltd., leading the technical development of RSVT. With extensive expertise in developing simulation tools and analyzing aircraft vulnerability and weapons effects, he is currently developing tools to rapidly evaluate the effect of aircraft structural damage on flightworthiness, performing coupled Euler-Lagrange simulations, and designing an improved test device for evaluating structural joints subject to hydrodynamic ram. Mr. Berg holds a B.S. in aerospace engineering from the University of Cincinnati.

Mr. Stephen Rosencrantz is the Director of Modeling and Simulation (M&S) at Skyward, Ltd. He has more than 22 years of experience leading and executing machine learning (ML), software engineering (SE), FEA, and synthetic-aperture radar (SAR) simulation projects. He is currently leading and growing Skyward’s M&S group as they develop RSVT; develop ML algorithms and software for automatic dependent surveillance-broadcast/electro-optical/infrared/lidar anomaly detection and digital engineering solutions; and provide simulation support to Department of Defense programs. Mr. Rosencrantz holds a B.S. in aeronautical and astronautical engineering from the University of Washington and an M.S. in mechanical engineering from Wright State University.