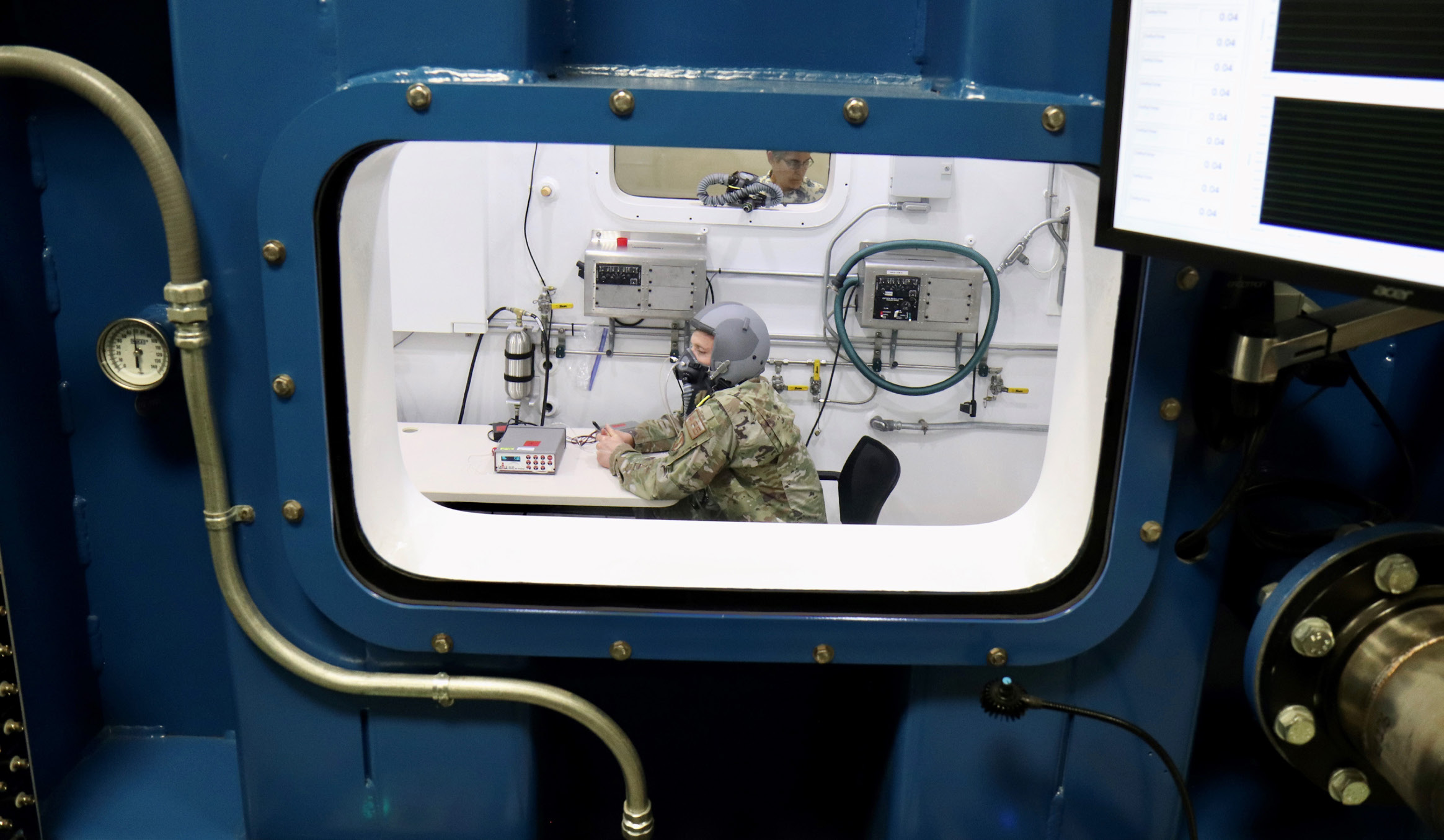 It’s something aviators have known for a long time. What works down on the ground doesn’t always work up in the air. Especially when it’s 50,000 or 100,000 ft up in the air. High alti­tude can negatively affect not only the inflight performance of components and equipment but also the cognitive and physical abilities of the aircrews who operate them. And when one further adds the inherent pressures of fast-paced, advanced combat operations into high-flying environments, the effects on performance can be even worse.

Accordingly, in May of last year, the Air Force Research Laboratory (AFRL) officially opened the doors to its four new Research Altitude Chambers (RACs) at Wright-Patterson Air Force Base (WPAFB), OH. The chambers, managed by AFRL’s 711th Human Performance Wing, were established to help researchers better understand and mitigate the effects associated with high-altitude flight operations. And in less than a year, this unique collection of state-of-the-art, computer-controlled test facilities has already reached new heights in altitude research on aircrews and equipment [1, 2].

This spring, three of AFRL’s new RACs were certified for manned studies up to 50,000 ft. This man-rating certifica­tion is unequalled throughout the Department of Defense (DoD) and distinguishes the testing facilities as a key resource to support the ever-rising manned-flight altitude requirements of both the Air Force and Space Force. And researchers aren’t stopping there. With the addition of some new equipment, the manned altitude ceiling is expected to soon rise to 60,000 ft [1, 2].

AFRL’s four RACs (shown in Figures 1–4) were each designed and built with different purposes and capabilities in mind [3]. 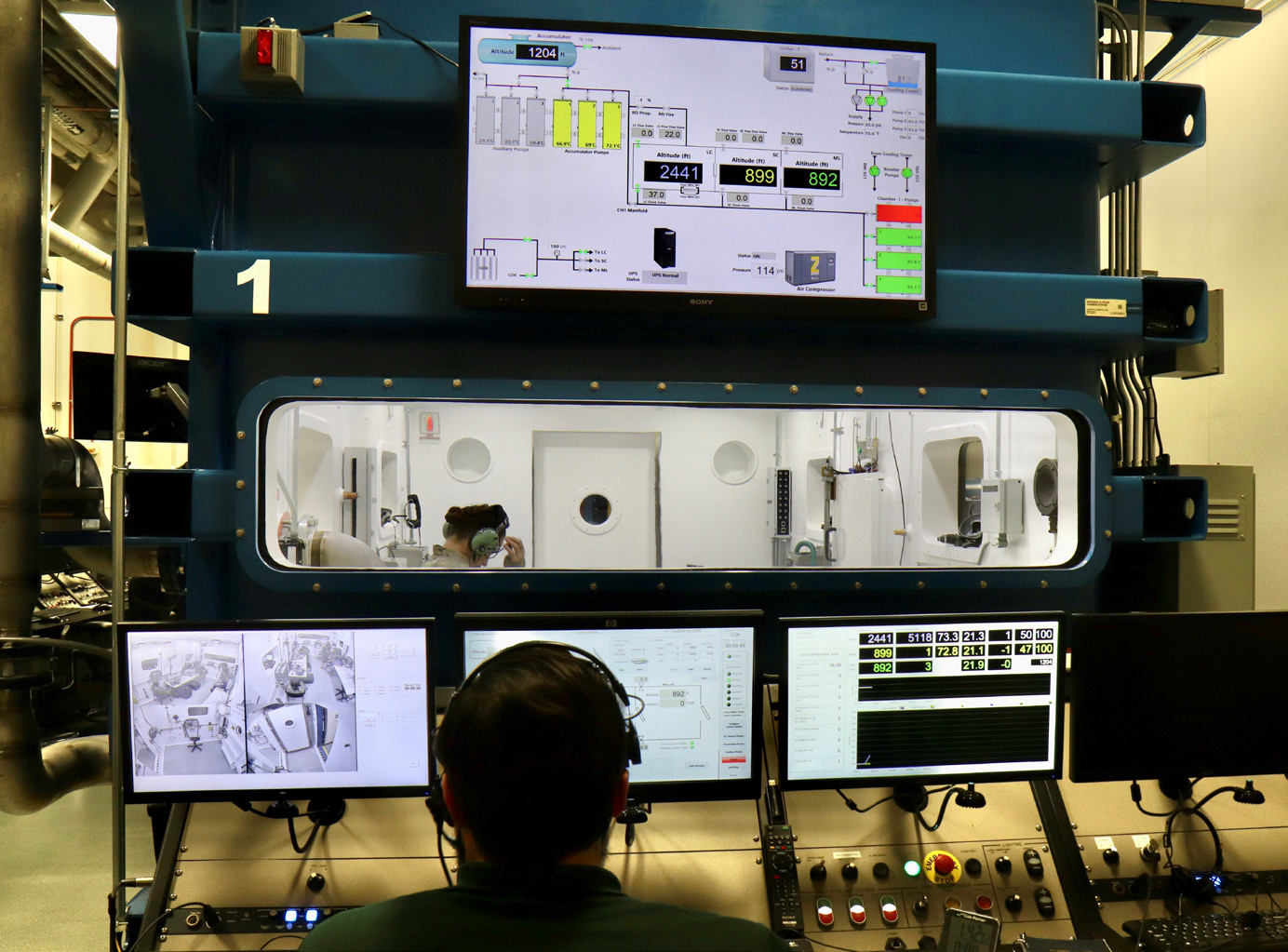 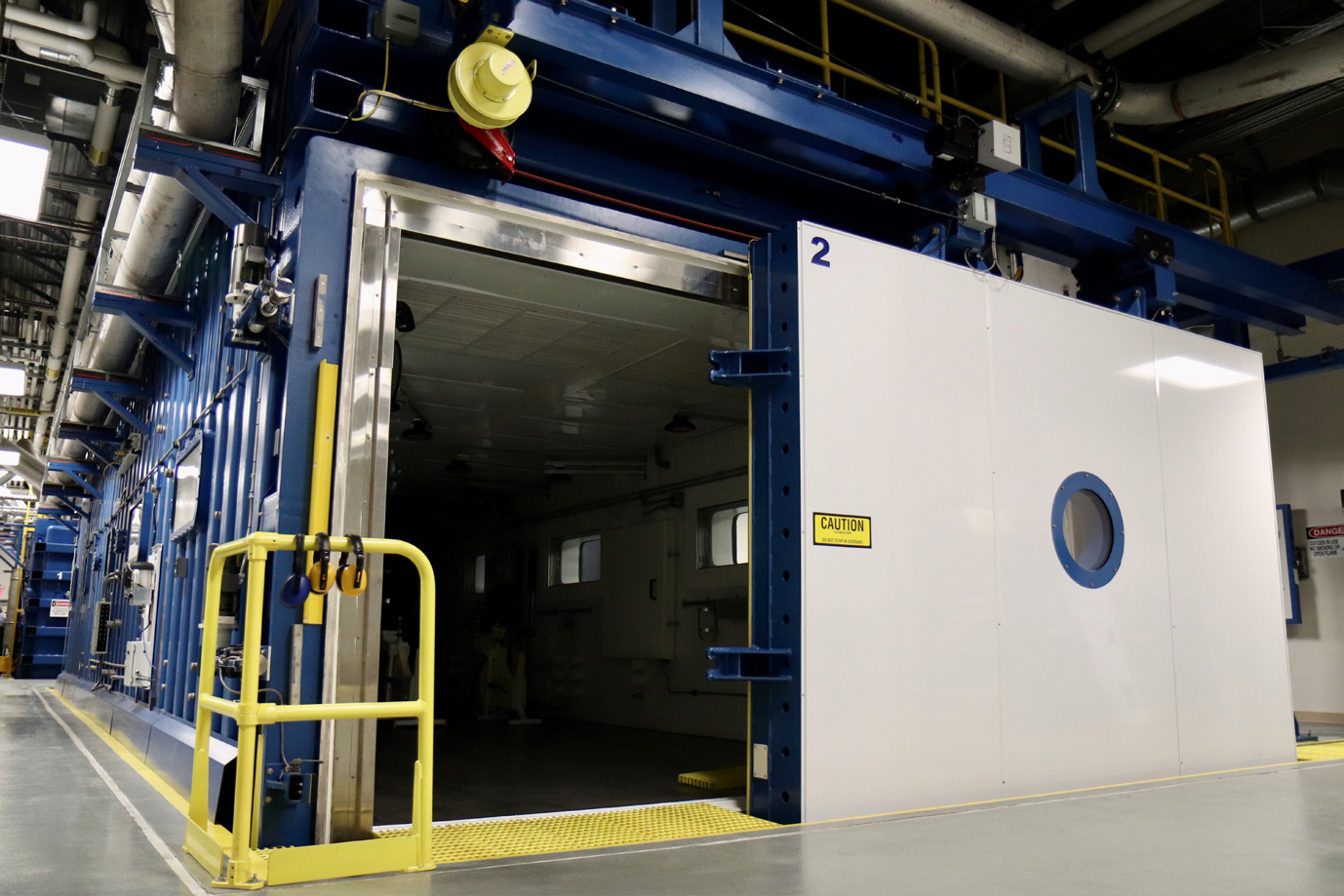 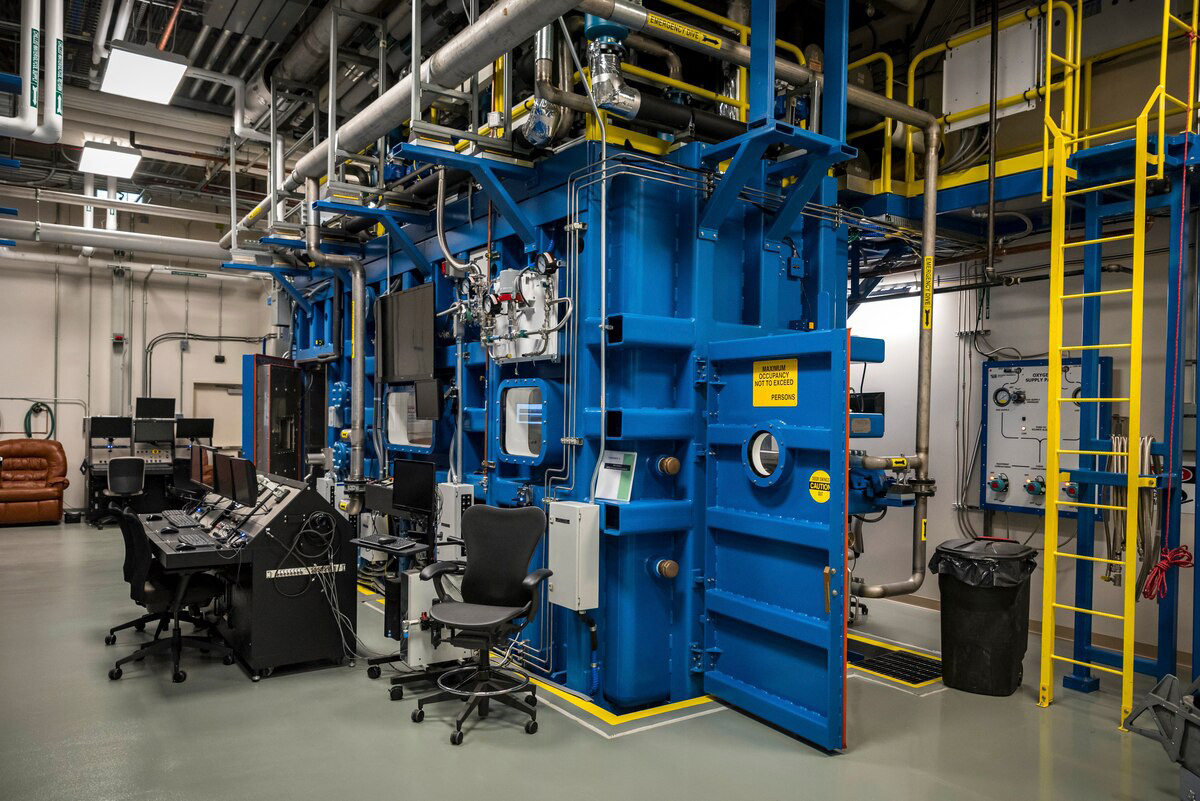 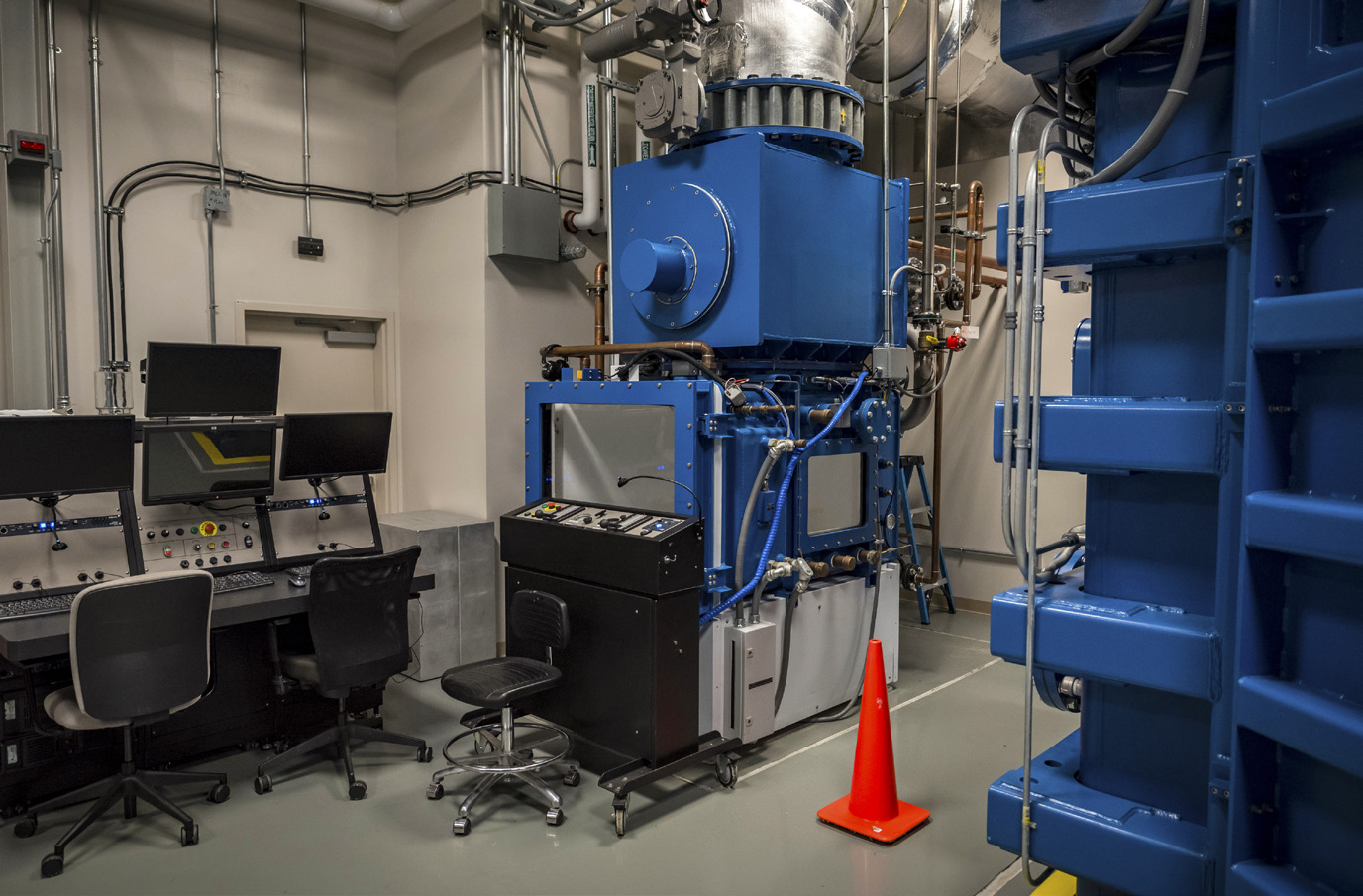 As a group, these chambers are continuing to provide aviation and aerospace researchers, manufacturers, testers, military planners, and others with important physiological and operational data and insights not otherwise available. Furthermore, the high-altitude training they offer aircrews is helping to ensure U.S. personnel and equipment are ready for the fight no matter the height.

PUTTING SOME SPIN ON IT

Of course, it’s not just altitude that can affect an aviator’s ability to perform his/her high-flying, fast-mov­ing missions. Today’s operational environments can, with little or no notice, thrust aircrews into extreme drops, climbs, turns, and spins, suddenly applying acceleration forces that can severely disorient and/or disable them. Thus, complementing AFRL’s new RACs at WPAFB are several other unique pieces of equipment to help researchers and aircrews prepare for some of these harsh effects.

One such piece of equipment is AFRL’s human-rated centrifuge, which has been in operation since 2018. Said to be the world’s most advanced (and the DoD’s only) human-rated centrifuge, this spinning beast has the capability to apply up to 9 g’s (9 times the normal force of gravity). This capability allows researchers to measure the often-debilitating high-g effects on personnel, as well as provides those personnel with an opportunity to experience the effects in a controlled, safe environment and to learn how to counteract them and remain conscious and in control of their aircraft. Moreover, the centrifuge is configu­rable to test not only jet pilots (who feel g forces mostly through the top of their heads in the z axis) but also astronauts (who feel g forces mostly in their chest in the x axis) [4].

An even more radical—and some might say tortuous—piece of equip­ment at WPAFB is the Kraken spatial disorientation device (shown in Figure 5). Spatial disorientation is the leading aeromedical causal factor in Class A aviation mishaps (incidents that destroy or cause more than $2 million in damage to the aircraft or result in a fatality or permanent total disability to personnel). With this phenomenon, the normal forces of flight and the body’s sensory receptors/responses can trick even a good pilot into believing the aircraft is doing some­thing it’s not (such as turning, pitching up or down, rolling, or even flying straight and level). And in an attempt to “correct” these misperceived motions/orientations, a pilot can take actions that can have potentially fatal results [5,6]. 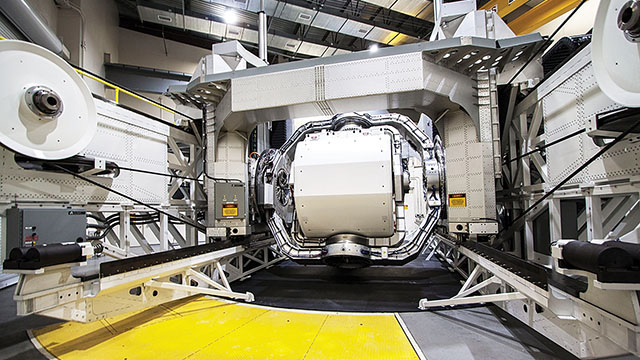 Accordingly, the Kraken device is a 245,000-lb machine developed in 2016 by the Naval Medical Research Unit Dayton (NAMRU-D), one of AFRL’s partners in aerospace physiology research, to simulate and study the kind of forces and spatial disorienta­tion that can get aircrews into trouble. This one-of-kind device—named after the mythical, multi-tentacled sea monster—has a six-axis range of motion, including 360°+ in the pitch, yaw, roll, and planetary directions, 33 ft of horizontal travel, and 6 ft of vertical (heave) travel. As such, it can simulate the behavior and acceleration forces (of up to 3 g’s) of essentially any air, ground, sea, or space vehicle in existence (not to mention the wildest amusement park ride imaginable) [5, 7, 8].

Clearly, the flight path of current and future U.S. air and space operations is one that will require our forces to fly higher, faster, and in more challenging situations than ever before. And just as clear is the fact that aerospace physiology testing and research— such as that being conducted at WPAFB—will continue to be vital for understanding and addressing the effects of these uncharted skies on the aircrews and equipment that venture into them.