Each year, the National Defense Industrial Association (NDIA) Combat Survivability Division (CSD) recognizes superior contributions to combat survivability by presenting awards for leadership, technical accomplishment, lifetime achievement, and excellence in a young professional. This year’s awards, which were part of the annual NDIA Aircraft Survivability Symposium on 5–7 November 2019, were once again presented at the Naval Postgraduate School’s historic Herrmann Hall in Monterey, CA. 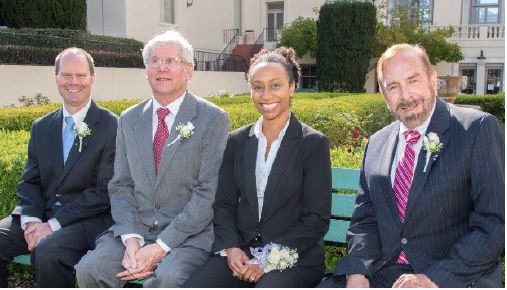 The Young Professional Award is presented to an early- to mid-career person (35 years of age or younger at the time of award) who has made a significant technical, analytical, or tactical contribution to any aspect of aircraft survivability.

The Technical Achievement Award is presented to a person who has made a significant technical contribution to any aspect of survivability. It may be presented for a specific achievement or for exceptional technical excellence over an extended period. Individuals at any level of experience are eligible for this award.

Mr. James E. Rhoads, currently a research staff member of the Institute for Defense Analyses (IDA), was honored for his more than 25 years of contributions to the aircraft survivability discipline. Mr. Rhoads is well known and respected as one of the pre-eminent vulnerability analysts of his generation. Recognized early in his career at the SURVICE Engineering Company as an expert vulnerability analyst performing fixed- and rotary-wing assessments, he also had a long and successful history at Lockheed Martin Aeronautics, leading numerous vulnerability analyses and the streamlined Live Fire Testing & Evaluation (LFT&E) for the F-35 program. He then joined IDA in 2010, supporting the LFT&E of several rotary- and fixed-wing aircraft programs for the Office of the Secretary of Defense Director of Operational Test & Evaluation. His most recent work has been the groundbreaking analysis of aircraft combat data from the wars in Afghanistan, Iraq, and Syria. His analyses have been widely briefed to Department of Defense, Service, and field leadership and flight crews, effectively impacting operational tactics while also definitively illustrating the value of early vulnerability design work.

Mr. Gary C. Wollenweber, the Consulting Engineer for Infrared (IR) and Thermal Design at General Electric (GE) Aviation, was recognized this year for his more than 42 years of sustained leadership in aircraft engine thermal design, specializing in exhaust nozzle cooling and IR signature control technologies. Mr. Wollenweber established the GE design practice for IR survivability analysis, design, and measurement, while serving as a major contributor or key designer for numerous fixed-wing, rotary-wing, and commercial-derivative aircraft exhaust systems. These systems include the B-2, A-12, ATF, F-16, F-18, E-3, C-5, A330 and B-767 tanker, H-60, H-1 and H-46, and CSAR-X. In addition, he has numerous patents related to gas turbine engines and is recognized within GE, industry, and academia as a leading expert in propulsion IR signature technology. He has also focused on the development of next-generation IR design professionals, serving as a mentor to numerous GE engineers, as an adviser to many Air Force graduate students, and as an author/instructor of multiple survivability/IR short courses. Finally, Gary has been an active and valued member of the Combat Survivability Division Executive Board for more than 19 years.

The Lifetime Achievement award is presented to a person who has made significant technical and leadership contributions throughout his/her professional career, spanning many or most of the numerous facets of aircraft combat survivability. This award is nominated by the CSD Executive Board and is intended to recognize an individual’s lifetime of accomplishments and dedication to the aircraft survivability community and to the aircrews we serve.

Mr. Neal W. Brune, Vice President for Countermeasures Business Development at Armtec Countermeasures Company, was recognized this year for his more than 50 years of leadership and prolific development within the national technology industrial base as a technical champion for the development of expendable countermeasures and aircraft survivability equipment. He has led the research and development, conceptual design, flight test, engineering and manufacturing development, and production of numerous chaff and flare systems, including everything from Vietnam-era chaff-dispensing pods and chaff roll sets tuned for the Hanoi air defenses; to generations of conventional chaff and flare cartridges; to advanced aerodynamic, kinematic, and pyrophoric IR expendables; to aerosol and ultrafine chaff technologies; to active RF expendable concepts. In addition, Mr. Brune has selflessly volunteered in many community roles, such as serving on the NATO Industrial Advisory Committee on Countermeasures Interoperability, as a Chairman of the Military Sensor Symposium on IR Countermeasures, and as a co-author on countless papers and several books on aircraft survivability, including chapter 4 of The Infrared & Electro-Optical Systems Handbook (volume 7) and the EW Handbook. His most significant contributions, however, have resulted in the many flare and chaff cartridges that continue to protect U.S. and allied pilots and aircrews. 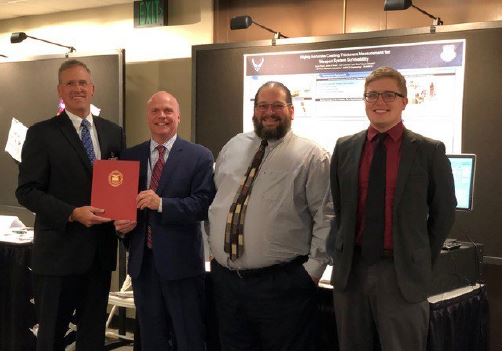 Congratulations to all of the 2019 Combat Survivability awardees for their many accomplishments and contributions.

As always, it’s not too early to consider who among our ranks is deserving of recognition next November at the 2020 NDIA Aircraft Survivability Symposium in Monterey. Is there someone in your own staff/organization who has demonstrated technical or leadership achievement in the survivability community? Also, is there someone among your early-to-mid career staff who has demonstrated a flair for the survivability discipline and is deserving of early recognition?

The CSD will publish award nomination deadlines and submission procedures later in 2020, but there is no need to wait. Those interested in making a nomination, gaining more information, or discussing the nomination process should contact Mr. Robert Gierard at robert.a.gierard@raytheon.com or 310-200-1060 or Ms. Jessica Lewton at jlewton@NDIA.org or 703-247-2588. 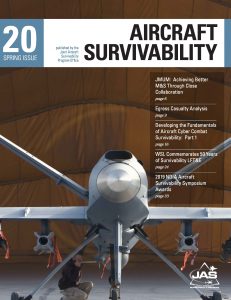