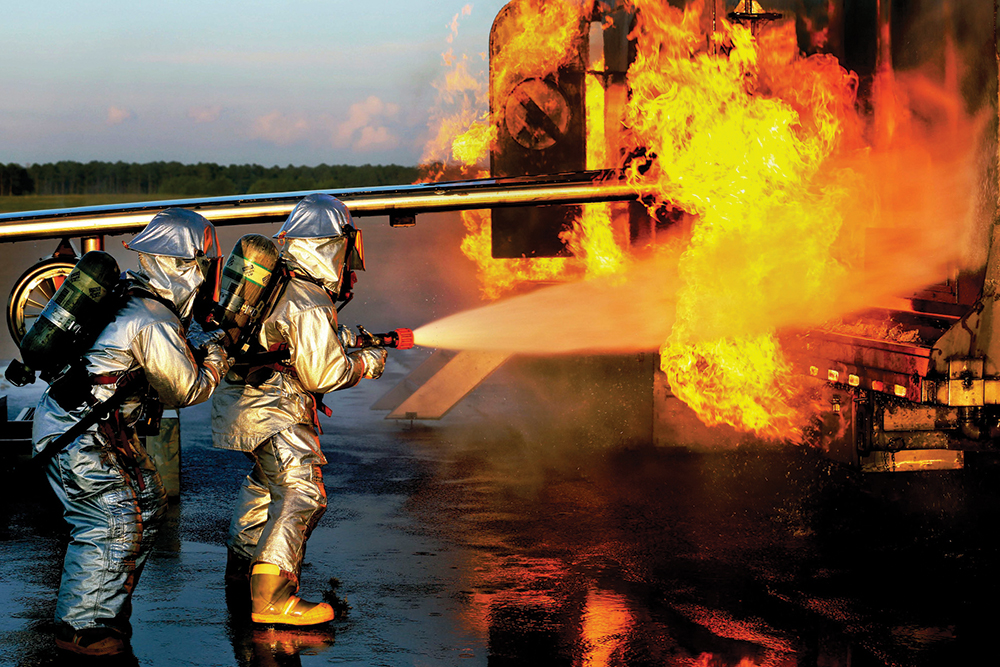 Air vehicle fatalities over the past decade have prompted defense leaders to emphasize crew protection as a focus area for survivability program initiatives.  In 2014, a crew compartment fire survivability project was conducted to investigate the impact of environmental hazards on combat personnel during fire events inside medium-sized transport military aircraft.  The project was based on the premise that occupants may not have sufficient time or technology to effectively suppress the fire.  Associated hazards such as smoke, heat, and toxic gases could potentially incapacitate aircrew from effectively reacting to the situation or interfere with the pilot’s situational awareness for sustaining flight.  Accordingly, the project’s primary objective was to collect thermal, optical, and toxicity data to characterize the physiological hazards within military aircraft crew compartments resulting from fuel fires.  In addition, occupant survivability was subsequently assessed in terms of time-to-incapacitation (ti) relative to physiological limitations published in medical literature.

Cabin fires were established inside a generic fuselage by igniting JP-8 fuel sprays generated from surrogate fuel nozzles representing a range of fuel line damage.  The test scenarios varied five parameters:  fuel pressure, nozzle size, vent configuration, mean internal cabin airflow, and fire location.  Instrumentation in the cockpit and cabin collected data on temperature, visibility levels, and toxic gas concentrations for an assessment of occupant incapacitation by these hazard modes.  The cockpit instrumentation was located in the general area of the pilot/co-pilot’s head.  Occupant incapacitation in the cabin was primarily assessed from video cameras, gas samples, and temperature data collected at the center of the cabin.  Additional temperature data were collected with 90 thermocouples distributed throughout the cabin.

A total of 51 test events formed a sample set of fire cases from the full population of possible scenarios.  All hazards that triggered their respective incapacitation limit prior to the end-test point

are shown in the cumulative failure plots for the cockpit location (Figure 1) and cabin floor (Figure 2).  Similar plots (which are discussed in the final report) were produced for the cabin ceiling and center levels [1].  The number of incapacitation occurrences for each hazard mode is given as cumulative percentages of the 51 tests.  Data slopes show the rate of 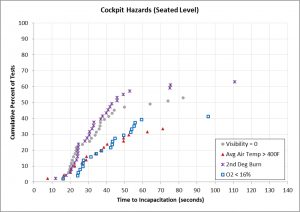 It is apparent that loss of visibility and second-degree burns are the dominant incapacitation modes, at least for the latter 70% of the time period.   Visibility degradation and second-degree burns may not truly “incapacitate” an occupant by definition, but they could interfere enough to prevent or disrupt action, such as maintaining flight control.  More direct incapacitations are a result of inhalation of high-temperature air and oxygen depletion below 16%.

Among the four locations assessed for time-to-incapacitation, the data suggest that the floor level is the best location to prolong an occupant’s ti (Figure 2).  Data slopes at the floor were much flatter by comparison with higher locations, so an incapacitation limit for a given hazard would occur much later at the floor, if at all.  Considering the two hazards of high-temperature air inhalation and oxygen depletion, less than 20% of tests resulted in their incapacitation limits being triggered within the first half of the time period shown in the figures.  Just 3 ft higher at the seated location, however, incapacitation by these two hazards nearly doubled within the same period. 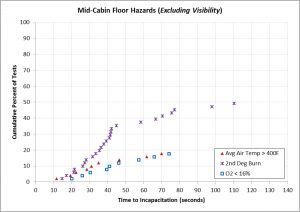 ts were not triggered in any of the tests.  However, the lack of toxic gases appearing on the incapacitation plots does not positively discount the threat of these hazards.  Events in this test series were necessarily time-limited to mitigate heat damage to test assets.  Standard Live Fire exposure criteria underlying the toxic gas assessment are generally intended for long-time events, so applying the criteria in the test events was inappropriate for accurately assessing toxic incapacitation.  Without standardized criteria for short-duration exposure limits, toxic gas incapacitations are more appropriately supported by the oxygen concentrations.

Collected data from this test program contained significant variability but still yielded clear trends for identifying the critical hazards of fire events, as well as the approximate timing for these hazards to reach incapacitating levels.  Second-degree burns and loss of visibility due to smoke are considered to be the most dominant threats for occupants at all locations above floor level, closely followed by the potential for immediate incapacitation due to elevated temperature and oxygen depletion.  According to the collected data, deleterious gases are not a factor of concern within the available time before optical incapacitation by smoke, and respiratory incapacitation by high temperature and oxygen depletion.  Ultimately, data from this test series indicate that the occupant incapacitations can be driven to zero the more rapidly a fire is extinguished, or the more rapidly ventilation is increased and emergency egress is executed.

Rapid fire suppression methods are thus recommended to protect against crew compartment fires.  In absence of an automatic suppression system, a training goal for aircrew should be to minimize reaction time and activate an extinguisher as rapidly as possible.

Adam Goss currently works with the 96th Test Group at Wright-Patterson Air Force Base, testing and evaluating aircraft vulnerabilities to combat threats, as well as researching and developing technologies to enhance aircraft survivability.  He holds B.S. and M.S. degrees in aerospace engineering from The Pennsylvania State University, where his academic research involved experimental aeroacoustics of supersonic exhaust jets from high-performance aircraft, as well as computational investigations into the aeroelastic effects of damaged flight surfaces. 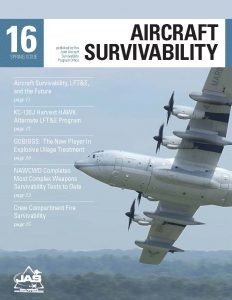