The Joint Aircraft Survivability Program Office (JASPO) is pleased to recognize Mr. John Manion for his Excellence in Survivability. John is currently the Survivability Assessment Branch Head and Site Lead for the Combat Survivability Division at the Naval Air Warfare Center Weapons Division (NAWCWD) in China Lake, CA. He has approximately 32 years of Government and industry experience in aircraft survivability analysis, testing, and design, serving as an internationally recognized survivability subject-matter expert (SME), leader, and mentor. He has worked on numerous Navy aircraft acquisition programs and joint-Service efforts and developed many innovative methods and tools for performing survivability analyses. 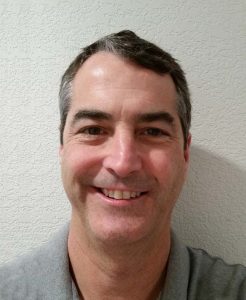 Born in San Bernardino, CA, and raised in Pittsburgh, PA, John earned a bachelor’s degree in mechanical engineering from the University of Pittsburgh in 1986. He would also later earn a master’s degree in systems engineering management from the Naval Postgraduate School (NPS) in 2015.

John’s career in survivability began when he accepted his first position at NAWCWD in 1987. He spent the next decade learning the survivability business and becoming the lead aircraft vulnerability analyst for the Combat Survivability Division. Notable Navy acquisition programs he supported during this time include the V-22, A-12, Naval Advanced Tactical Fighter (NATF), UH-1, H-60, and F/A-18. He also served as a voting member of the Joint Technical Coordinating Group on Aircraft Survivability (JTCG/AS) Vulnerability Committee, helping to plan and schedule joint-Service projects.

In 1997, John changed his badge from Government employee to contractor when he joined the SURVICE Engineering Company. Here, he would work for the next 10 years as a senior engineer, team lead, chief analyst, and eventually deputy operation manager. He provided technical leadership and oversight on a host of survivability programs, helped develop hardware and software products to improve the efficiency and effectiveness of survivability analysis and testing, and contributed significantly to the company’s expansion and business development efforts, including helping to open the company’s Eglin Area (now Gulf Coast) Operation.

During this period, John also continued his long history of sharing his survivability knowledge with others, as he mentored and assisted both Government and contractor personnel in the areas of aircraft systems, threat systems, and aircraft vulnerability analysis, including developing and providing formal training to many community members on the Computation of Vulnerable Area Tool (COVART) and UEDDAM software programs.

In 2007, John made one more badge switch when he returned to Government status, accepting a position as Chief Vulnerability Analyst with NAWCWD. In this role, he provided leadership and direction for all vulnerability projects in the Survivability Assessment Branch and supported acquisition efforts such as the Joint Strike Fighter (JSF), Harvest Hawk, P-8A, and the Unmanned Carrier-Launched Airborne Surveillance and Strike (UCLASS) programs. He also served as an SME supporting the Joint Aircraft Survivability Program (JASP).

As a result of John’s contributions and accomplishments at NAWCWD, in 2014 he moved to his current position as Survivability Assessment Branch Head and Site Lead for the Combat Aircraft Survivability Division, where he has managerial and technical responsibility for a 12-person branch and all of its programs. This includes supporting the survivability design for a wide range of Navy aircraft programs (such as the F/A-18E/F, V-22, P-8A, F-35, and CH-53K) from initial concept development through operational fielding.

Not surprisingly, John has been the recipient of numerous awards and recognitions throughout his career, including the Wayne E. Meyer Award for Excellence in Systems Engineering, which he received for outstanding academic achievement in the Joint Executive Systems Engineering Management Master’s Degree Program at NPS in 2015. He is also an accomplished briefer and author of many technical reports and papers. In addition, he holds a patent for a vulnerability reduction device to protect aircraft hydraulic systems.

Outside the office and the world of aircraft survivability, John enjoys hiking; exercising; playing bass and providing backup vocals for his local cover band; as well as spending time with his wife, Molly, and their two dogs and two cats.