The American Institute of Aeronautics and Astronautics (AIAA) Survivability Technical Committee (SURTC) has selected Mr. Charles (Chuck) Frankenberger to be the recipient of its 2020 AIAA Survivability Award. The award—which was presented at the organization’s annual Science and Technology Forum and Exposition (SciTech 2020) in Orlando, FL, on 6–10 January—was in recognition of Chuck’s technical and leadership excellence in propulsion system survivability enhancement and multi-service test programs execution to evaluate and improve overall aircraft survivability.

Chuck’s career, encompassing more than 30 years, has been focused on supporting the survivability community in the areas of aircraft propulsion system survivability and Live Fire Test & Evaluation (LFT&E). His technical achievements have been instrumental in developing propulsion system technologies and analysis methodologies to reduce aircraft vulnerability to combat threats and in prolonging engine life during normal operation. These developments include methodologies for identifying engine combat vulnerability and for damage detection and mitigation during engine service life. His accomplishments in these areas have greatly benefitted both military and commercial aviation.

As the current Systems Vulnerability Branch Head for the Naval Air Warfare Center Weapons Division (NAWCWD) in China Lake, Chuck provides oversight and management of the Weapons Survivability Laboratory (WSL), leading his organization in maintaining an impressive array of survivability testing capabilities. For example, he helped initiate development of a spin fixture, which evolved into a dynamic test capability for helicopter drive trains, including shafts, gearboxes, and rotors. He is also continuing to spearhead future efforts to expand capabilities into emerging threats, including directed energy (laser and radio frequency). He was also a lead figure in the merger of Air Force and Navy vulnerability LFT&E test capabilities at WSL.

In addition to his current NAWCWD Branch Head role, Chuck has also assumed numerous other leadership roles within the U.S. Navy and other organizations. These roles have included serving as a Navy member on the Joint Aircraft Survivability Program (JASP) Vulnerability Reduction Subgroup, as Chairman for the JASP Vulnerability Reduction Subgroup Propulsion Committee, and as a Navy member of the Federal Aviation Administration (FAA) Catastrophic Failure Prevention Program. 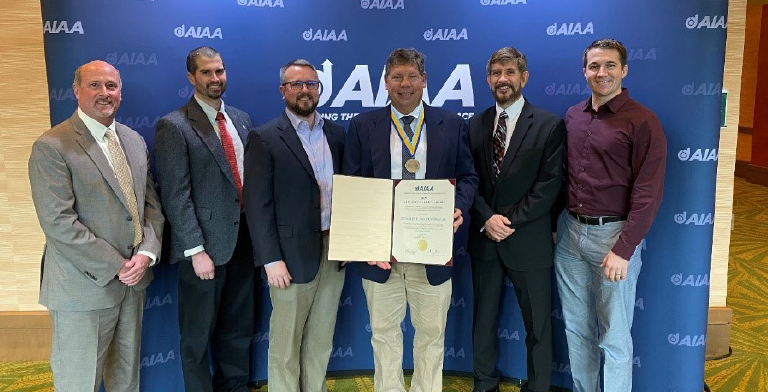 Chuck’s unparalleled expertise in engine vulnerability began with his efforts as lead for turbine engine vulnerability programs. Serving as test engineer for propulsion efforts during the V-22 and F/A-18E/F LFT&E programs, he gained early insight into the world of digital engine controls. He worked with the FAA Technical Center and the Navy through an Interagency Agreement (IA) and led efforts to collect data for, and define the characteristics of, an uncontained engine failure. This work eventually led to the development of the Uncontained Engine Debris Damage Assessment Model (UEDDAM), its proposed use for compliance with FAR 25.903 (d) rotor burst assessment, and revisions to the FAA’s Advisory Circular 20-128A for multiple fragment threat analysis.

Both safety and LFT&E issues were addressed during the C-5 Reliability Enhancement and Re-Engining Program (RERP) using FAA-endorsed methodologies that stemmed from Chuck’s work, answering critical questions about safety and vulnerability of the upgraded engines due to cascading damage. Through a second IA, the Navy increased its involvement in the Catastrophic Failure Prevention Program. He coordinated participation from the FAA, the Navy Propulsion RDT&E, NASA Glenn, and NAWCWD, resulting in a very successful engine test evaluating on-engine detection methodologies. Numerous FAA technical reports were published as a result of this program.

Chuck’s organization was one of only three in the U.S. to run the full-up STOVL propulsion system. His leadership and technical oversight ensured that the vulnerability of all three JSF variants was fully documented and assessed against the stated objectives in the Operational Requirements Document, Aircraft Specification, and Test and Evaluation Master Plan. Of further note was the successful completion of five man-portable air defense system (MANPADS) live fire tests, which included impacting fully operating engines. Chuck’s consistent, superior performance and meticulous attention to detail was instrumental in delivering the most tested and analyzed tactical aircraft of all-time.

Chuck also developed and directed JASP projects during the highly successful Survivable Engine Control Algorithm Development (SECAD) program. Through the use of digital engine controls, SECAD demonstrated state-of-the-art engine damage detection and mitigation methodologies using production engine sensor and control hardware. These efforts resulted in the development of a methodology to detect engine gas path damage. This technology has since been applied to commercial high-bypass-ratio turbofan engines and small helicopter turboshaft engines, and the work was highlighted at an IEEE Symposium and in Aviation Week magazine.

Congratulations, Chuck, on this well-deserved award!

Mr. Michael Schuck is the Manager of the SURVICE Engineering Company’s Dayton Area Operation. He has more than 15 years of vulnerability expertise evaluating fixed-wing and rotary-wing platforms against kinetic energy, directed energy, and nuclear threats. He has also been active in AIAA for more than 12 years, serving as the Chair, Vice Chair, and Secretary of the AIAA SURTC.