The development, integration, and thorough testing of survivability systems for aircraft are typically inhibited by the high cost of full-system crashworthiness testing. High-fidelity modeling and simulation (M&S) is a valuable tool that can be used to supplement physical testing when time and budget constraints are present, providing for a complete and holistic assessment of system-level performance. The integration of human occupant and advanced anthropomorphic test device (ATD) models can further be used to improve the analysis. Thus, the U.S. Army Combat Capabilities Development Command’s (CCDC’s) Army Research Laboratory and Corvid Technologies, in coordination with the Joint Aircraft Survivability Program Office, have completed a project demonstrating the value of high-fidelity M&S in improving rotary-wing aircraft survivability and crashworthiness analysis. To this end, Corvid developed a model of the UH-60M Black Hawk as a demonstration of existing capabilities and to discover gaps that require method or tool improvements. This approach addresses the needs of the U.S. Army and Program Executive Office (PEO) Aviation to improve aircraft survivability and crashworthiness to meet the key performance parameters required of Future Vertical Lift platforms.

Predictive M&S provides the opportunity to improve test device technology, inform load profiles for testing components or subsystems, and supplement the limited number of crashworthiness developmental tests. However, since responses in the airframe, energy absorbing (EA) seats and floor technology, and the occupants themselves are highly nonlinear, this problem needs to be solved using a fully coupled and single simulation domain, rather than relying on one-way coupling between locations in the aircraft and occupant models. Highly resolved finite element meshes, sophisticated nonlinear strength and failure constitutive models, a highly scalable physics solver, and high-performance computing (HPC) resources are all needed to realize the benefits of modeling to yield a predictive capability. A full-system simulation capability also begins to fill a significant deficiency in the current testing of rotary-wing aircraft, where full-system drop testing is rare, if conducted at all.

These tools and resources have been proven effective through a similar approach for design and evaluation support for ground vehicle survivability. A similar demonstration effort started in support of Joint Program Office Mine Resistant Ambush Protected (JPOMRAP) in 2010 to extend the application of Velodyne, an explicit dynamics multi-physics solver (which was originally developed to predict postintercept debris for the Missile Defense Agency) to the survivability of vehicle structures. Corvid continued to refine the capability and evolve the technology to not only provide predictive simulations on vehicle structural response but also provide insight into occupant injury by modeling the response of the ATD used in Live Fire Test and Evaluation Incorporating this additional metric enabled Corvid to provide full-system analyses to inform and supplement testing.

To aid in improving crashworthiness survivability technology, a finite element model was developed for use in simulating crash events with full airframes, landing gear, and seats of the rotary-wing aircraft of interest, along with occupant models. This full-system modeling approach can capture events ranging from EA landing gear and seat function, to composite airframe failure,to occupant response. In coordination with the Utility Helicopter Project Office and the Aviation Development Directorate, Corvid combined government purpose rights data, optical metrology, and blue-light laser scan data to develop a high-fidelity structural model of the UH-60M. Particular detail in this model was paid to the landing gear, as it provides for primary energy absorption upon impact during hard landings. The tires, oleo struts, and their integration details were all considered critical and modeled in great detail.

A similar level of detail was paid to the troop seats, as these largely determine the loading experienced by occupants during a crash event. Extensive troop-seat test data from the Air Force Research Laboratory (AFRL)—collected through testing sponsored by the Defense Safety Oversight Council and the Live Fire Test Division of the office of the Director, Operational Test and Evaluation—provided validation for seat model development efforts [1, 2]. Subsystem models of the seats (both the Army’s M-variant and A/L legacy troop seats) were developed and simulated in pure vertical, combined vertical, and horizontal loading conditions for comparison with the laboratory results. Once good correlation was achieved, the seat models were then integrated into the full system-level UH-60M model. Figure 1 provides a representation of the quality of fit provided by the troop seat models.

Figure 1. Correlation Between AFRL Test Data (in Black) and Velodyne M&S for the UH-60M Troop Seat.

This project also leveraged ongoing advanced human injury modeling capabilities to complete the demonstration effort. These developments expand on the high-fidelity model of the current ATD, which is being used to evaluate occupant response in crashworthiness evaluation. Corvid has also developed models for the more sophisticated Warrior Injury Assessment Manikin (WIAMan) ATD for vertical acceleration-based injury, as well as high-fidelity human body modeling with the Computational Anthropomorphic Virtual Experiment Man (CAVEMAN), which includes strength and failure parameter development for musculoskeletal systems and internal organs. Figure 2 illustrates the resolution of the CAVEMAN model, including explicit representation of all components of the musculoskeletal system with rate-dependent material models with injury specificity. 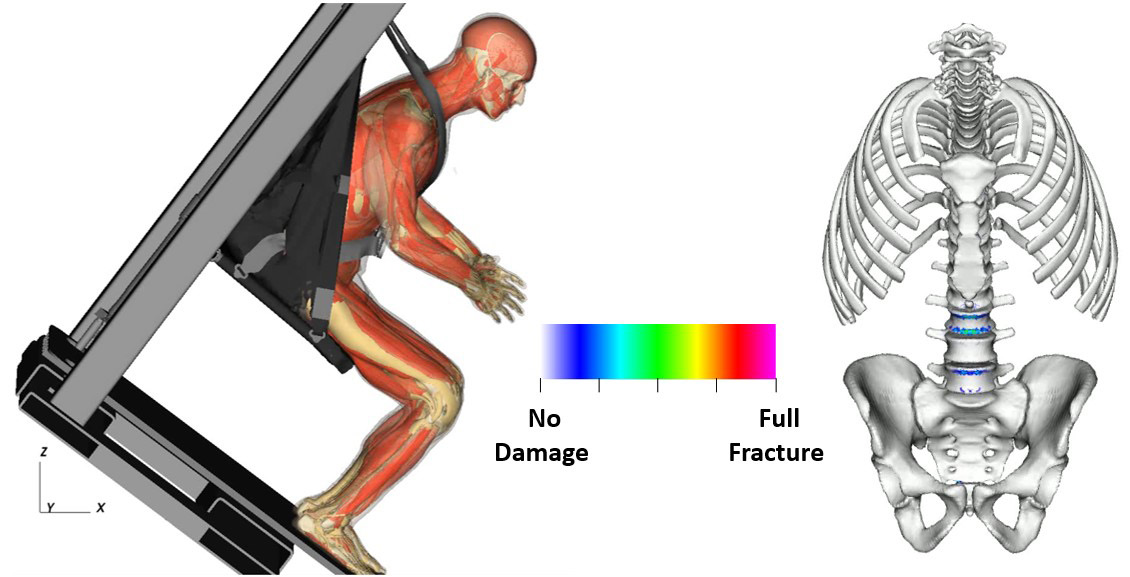 Once the full model was assembled, a range of impact conditions was demonstrated to prove out the robustness of the system-level model as well as the coupling of numerical approaches to capture soil plowing and water impact in addition to hard surface impacts. Velodyne provides for a scalable approach to Lagrange solid element conversion to smoothed particle hydrodynamics (SPH) particles as the simulation progresses. This allows for the impact surface to be modeled efficiently as solid elements early in time and convert to SPH particles only where needed. Impact conditions, including roll and pitch conditions, were simulated in accordance with MIL-STD-1290A(AV) [3].

While ground vehicle modeling efforts have been broadly correlated with full-system tests, these data were not available for the UH-60M. However, technicians at the Aviation Development Directorate helped to identify areas in which the aircraft normally starts to fail based on their post-incident inspections, and the model shows a similar pattern of failure. This information helped to develop confidence that the model was capturing the correct load path and major failure modes. With this limited correlation, the model was used to evaluate the aircraft performance at various impact conditions by looking at structural response and the severity of occupant injury.

A common trend was observed that echoes the lessons learned in underbody blast testing: the longer the duration of the event, the less injury that occurs as peak forces and accelerations are reduced (as long as the EA technologies are not overmatched or bottom out). In addition, orientations and ground media that spread the load out over more area of the aircraft or delay the hard crash landing often result in lower occupant injuries. Landing tail first or nose down absorbed energy in areas away from the troop seats and allowed the main landing gear and seat EA devices to function more efficiently. Conversely, flat landing orientations that simultaneously engaged all the landing gear were more detrimental to the occupants as the aircraft decelerated over a shorter amount of time. Figure 3 illustrates a few of the conditions simulated with representative results. 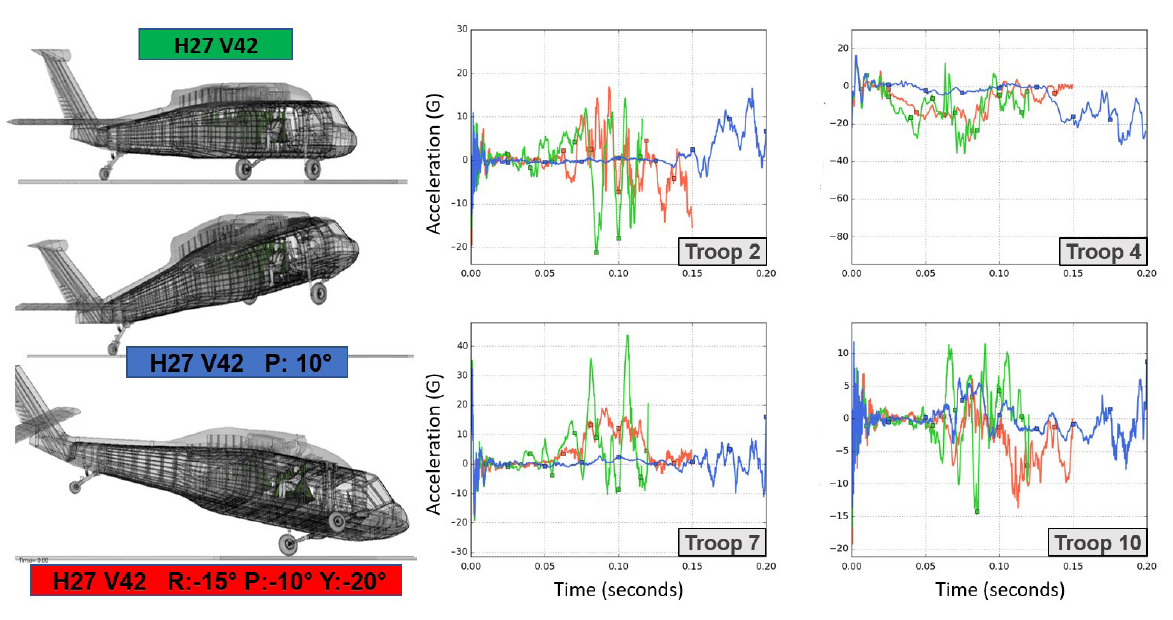 The flexibility of the model allows any combination of crew/troop configuration, cargo loadout, and crash orientation, enabling the model to be used in crash injury prediction, statistical analysis, and event reconstruction. When used in conjunction with technology development and integration efforts, crashworthiness evaluations can be performed faster, cheaper, and more thoroughly. High-fidelity models are resources that can help inform testing procedure, provide insight into unexpected test results, and provide repeatable and reliable subsystem and full-system comparison data that are critical for system test and evaluation.

The effort described herein has provided the blueprint for the methodologies and techniques required to develop high-fidelity models of aircraft systems when traditional manufacturing models and drawing packages are not available for government purpose use. The methods used to develop the UH-60M model could easily be applied to other aircraft and vehicles to aid in full-system analysis and testing. When coupled with advanced human injury modeling capabilities, these models become unique tools in the ongoing efforts to improve crashworthiness and reduce injury to aircrew and troops across all Service branches, especially as Future Vertical Lift requirements push to higher aircraft speeds and protection across the full range of occupant sizes, weights, and equipment loadouts.

Mr. Allen Shirley is currently a Program Director for Corvid Technologies. For the past 18 years, and including his prior civil service position at the Naval Surface Warfare Center, he has been developing and applying high-fidelity M&S tools and methods for lethality, vulnerability, and survivability problems across the DoD. Mr. Shirley holds a B.S. in mechanical engineering from Clemson University.

Mr. Drew Slusser is currently a Senior Analyst with Corvid Technologies. He has more than 15 years of experience supporting various DoD agencies, with a specific focus on full-system, high-fidelity finite element modeling and analysis of aircraft, ground vehicle, and missile systems. Mr. Slusser holds a bachelor’s and master’s degree in mechanical engineering from Clemson University.

Ms. Megan Lynch is currently a mechanical engineer for the U.S. Army Combat Capabilities Development Command Army Research Laboratory (CCDC ARL). She has 12 years of experience in the areas of computational biomechanics and manufacturing technology programs. Ms. Lynch holds a B.S. and M.S. in mechanical engineering from Rutgers University.

Dr. Bryan Cheeseman is currently the rapid technology transition team leader for the Materials and Manufacturing Sciences Division of the CCDC ARL. He has a B.S., M.S., and Ph.D. in mechanical engineering from the University of Delaware.