The ongoing development of tiltrotor technology has provided the U.S. military with capabilities and potential not otherwise available with conven­tional fixed-wing and rotary-wing systems. Tiltrotor aircraft—such as the current V-22 Osprey, as well as some of the planned Future Vertical Lift (FVL) vehicles—have (or are expected to have) the ability to hover like a helicop­ter and fly at the forward speed of a fixed-wing plane. Thus, the Army and others continue to express interest in this unique and promising technology.

But with great promise also comes great challenge. Tiltrotor aircraft have experienced significant aerodynamic stability issues, especially during the transition between hovering and forward-flight modes. The air flowing around the propellers (as the engine rotors move from a horizontal to a vertical orientation) can interfere with the air flowing around the wings and generate a dangerous (and sometimes even catastrophic) condition called whirl flutter. 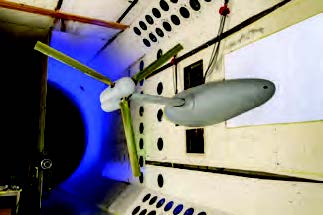 Unfortunately, many of the current computational tools for predicting tiltrotor stability date back to the origin of the V-22 in the 1960s and ‘70s. TRAST, however, is planned to help researchers leverage modern-day computing power as they develop state-of-the-art analysis software to support innovative tiltrotor designs (such as wing extensions) that can help address the whirl flutter problem.

In building the TRAST model, developers used the NASA Structural Analysis (NASTRAN) code to model wing aerodynamics and the Comprehensive Analytical Model of Rotorcraft Aerodynamics (CAMRAD) and Rotorcraft Comprehensive Analysis System (RCAS) to model the aircraft itself. This combination allowed aerodynamic behavior to be isolated to individual aircraft components and stability boundaries to be estimated in TRAST.

For more information on TRAST and the Army’s tiltrotor development initiatives, readers are encouraged to download the full article at https://www.army.mil/article/241434/wind_tunnel_ tests_will_help_design_future_army_tiltro­tor_aircraft.

In December, the Navy and Boeing Co. recorded the first successful launch of an F/A-18 Super Hornet fighter jet from a ski-jump-type ramp at the Naval Air Station (NAS) Patuxent River in southern Maryland. The purpose of the launch, which was conducted for India and included a variety of load configura­tions, was to demonstrate the fighter’s capability to launch from short-runway ships.

Unlike U.S carriers, which use high-powered catapult systems to launch aircraft from flat flight decks, India’s newest aircraft carrier, the INS Vikrant, uses a ramped flight deck (simulated by the ski-jump ramp) to launch its planes. The test was part of India’s validation process to potentially acquire a number of upgraded F/A-18 Block III Super Hornets for its naval aviation forces.

In 2015, the Pax River ski ramp was also used to demonstrate the short take-off capabilities of the F-35 Joint Strike Fighter for countries such as the United Kingdom and Italy, which fly the F-35 and also use ramped-deck carriers. 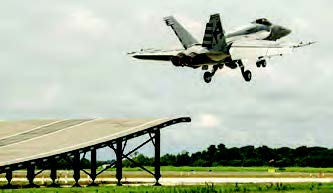 The 2021 Joint Aircraft Survivability Program (JASP) Model Users Meeting (JMUM) has taken on a look unlike any other in its 22-year history. Unclassified virtual sessions were held in March and April for the Next Generation Fire Model (NGFM), the Computation of Vulnerable Area Tool (COVART), the Fast Air Target Encounter Penetration (FATEPEN), and the Projectile Penetration (ProjPen) vulnerability and lethality models. To address the community’s ongoing modeling and simulation needs that can only be addressed in a classified setting, an in-person session will also be held from 31 August to 1 September at the Georgia Tech Research Institute in Atlanta.

The purpose of the recurring JMUM is to provide model users, managers, stakeholders, and others with informa­tion about the latest developments and updates associated with JASP-sponsored and other models used in the aircraft survivability and combat effectiveness community. In addition, attendees are encouraged to share specific insights and lessons learned from their practical use of the models.

The August meeting will also include concurrent group breakout sessions for Air-to-Air Engagement and Surface-to-Air Groups, as well as Configuration Control Board meetings for the Brawler and the Survivability and Lethality of Aircraft in a Tactical Environment (SLATE) models. Models covered in the breakout sessions will include those shown in Table 1.

The finalized agenda for this year’s in-person JMUM will be announced through the Defense Systems Information Analysis Center (DSIAC) as soon as details are finalized. For more information or to inquire about being a presenter, please contact Mr. Alfred Yee at 937-255-4608 or alfred.yee@dsiac.org. 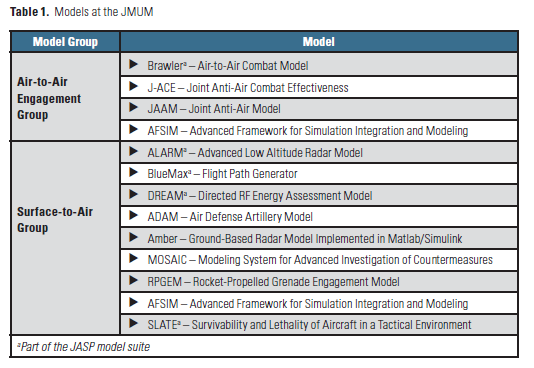 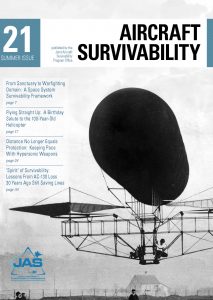