STOP THE BULLET: ADVANCING THE STATE OF THE ART IN SPACED AIRCRAFT ARMOR 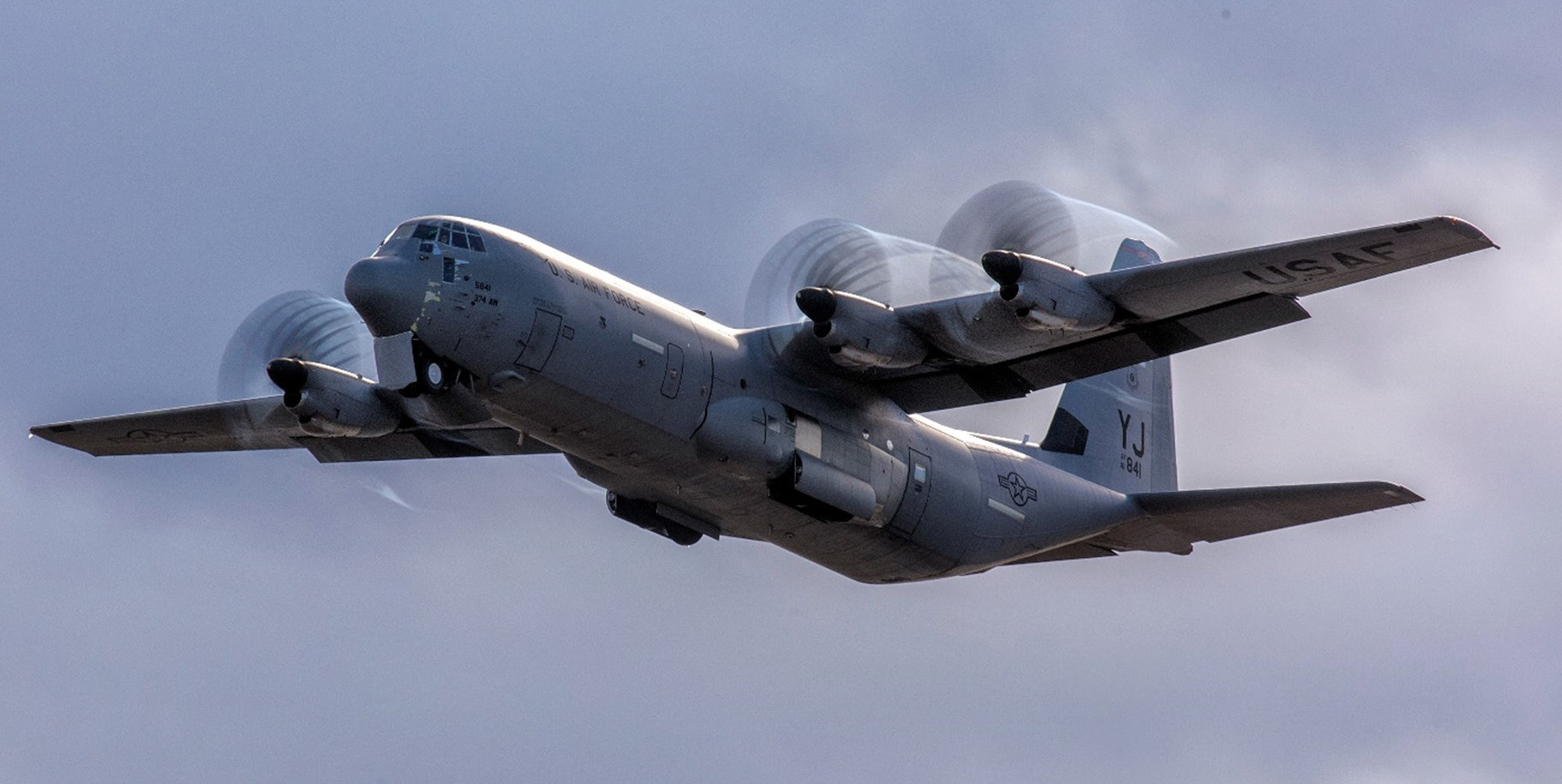 As aviation systems are developed for the Joint Force, survivability must be integrated as a key component of performance parameters. This threat-based mindset will serve U.S. forces well in the development of balanced and capable platforms that will encounter a variety of operating environments and adversaries. Moreover, when considering survivability-enhancing equipment, options for kinetic/ballistic defeat are critical. Unfortunately, today’s aircraft armor is often heavy and provides limited ballistic threat defeat. The challenge is thus to be able to protect against relevant, highly proliferated armor-piercing (AP) threats without introducing significant weight penalties for the aircraft.

(Note that, for security reasons, the specific armor areal densities, threats, and round velocities used have been excluded from this overview. For more information on these specifics, readers are encouraged to contact the authors.)

LAYERS, SPACE, AND TUMBLING: A LETHAL COMBINATION FOR KINETIC DEFEAT

Significantly lighter than other modern armor systems, the subject technology incorporates Hardwire’s proprietary Turning Block (TB), which comprises composite materials oriented in a unique topology within a spaced armor system. This system provides for the possibility of numerous survivability options for aircraft in extremely lightweight configurations.

For the recent JASP program, the team’s overall objectives were as follows:

Ultimately, this program was able to exceed these goals, successfully demonstrating a >40% weight savings over today’s state-of-the-art technology.

As shown in Figure 1, this type of spaced armor configuration leverages air gaps between two (or more) panels. The TB panel serves as the strike face of the armor system and is configured to deflect or tumble the incoming projectile. After tumbling, subsequent armor layers catch the projectile. As such, the overall spaced armor package is typically thicker than an armor solution that contains all the protective material as one panel or plate.

The TB panel is followed by an air gap and then a subsequent layer of armor, called a Catcher Plate (CP), which “captures” the incoming, tumbling projectile. The defeat mechanism for the TB relies on that tumbling effect and is not dependent on significant blunting or shattering of the AP penetrator. This approach is different from ceramic-based armor solutions that rely on penetrator shattering to defeat the round. Because the TB relies on penetrator tumbling and not penetrator shattering, it works equally well on threats of all penetrator hardness, which makes it especially weight-efficient against even the most difficult AP threats.

In principle, the larger the air gap is, the further the threat turns, and the lighter the armor system can be. There is a direct correlation between system weight and thickness. The team thus investigated the weight/thickness trade space for specific AP threats and considered various TB materials and thicknesses, CP configurations, and other aspects that affect the ability to integrate the technology on aircraft. These aspects included threat obliquity, backface deformation of the CP, and multihit capability.

At the program onset, powder curves and a test setup were established for ballistic evaluation. Ballistic testing was conducted in Hardwire’s gun tunnel using a universal receiver and the range setup shown in Figure 2. 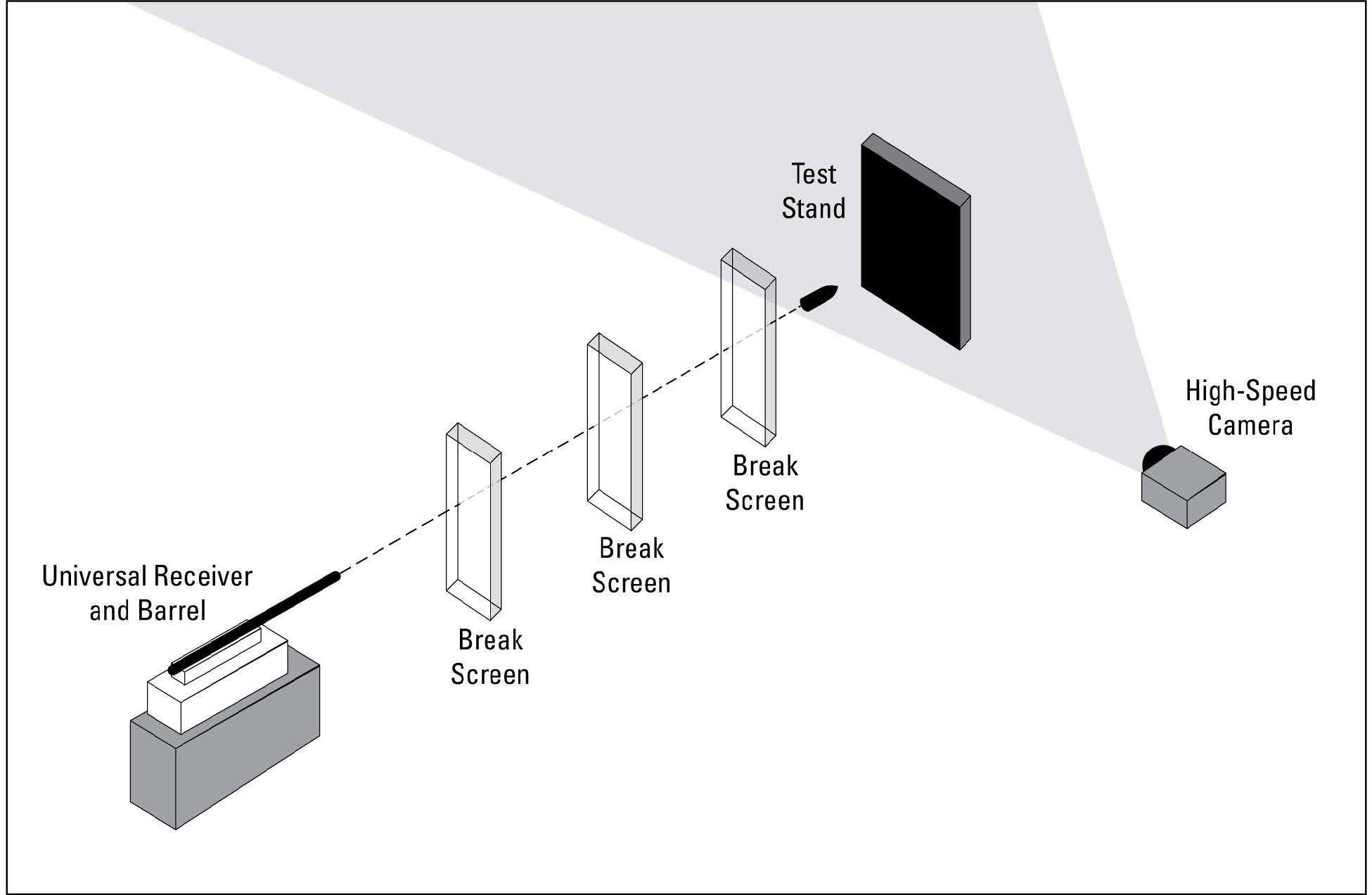 At the start of testing, a baseline TB material made from “traditional” composites was used. The baseline TB material had previously shown success against various AP threats. However, to assess and leverage the improved grades of materials that have been developed over the past decade, higher-grade materials were also investigated. These materials resulted in significant enhancements to the TB’s performance and ultimately enabled the use of lighter-weight and thinner armor than ever achieved before.

Specifically, three material grades for the TB were investigated in this work—Baseline TB, Enhanced TB1, and Enhanced TB2. Using different materials with different properties demonstrated that improvement in raw materials resulted in a better-performing TB. These higher grades of material increased the induced projectile yaw and provided efficient tumble, which allowed the overall system thickness and/or the overall system weight to be reduced without lowering the ballistic protection. 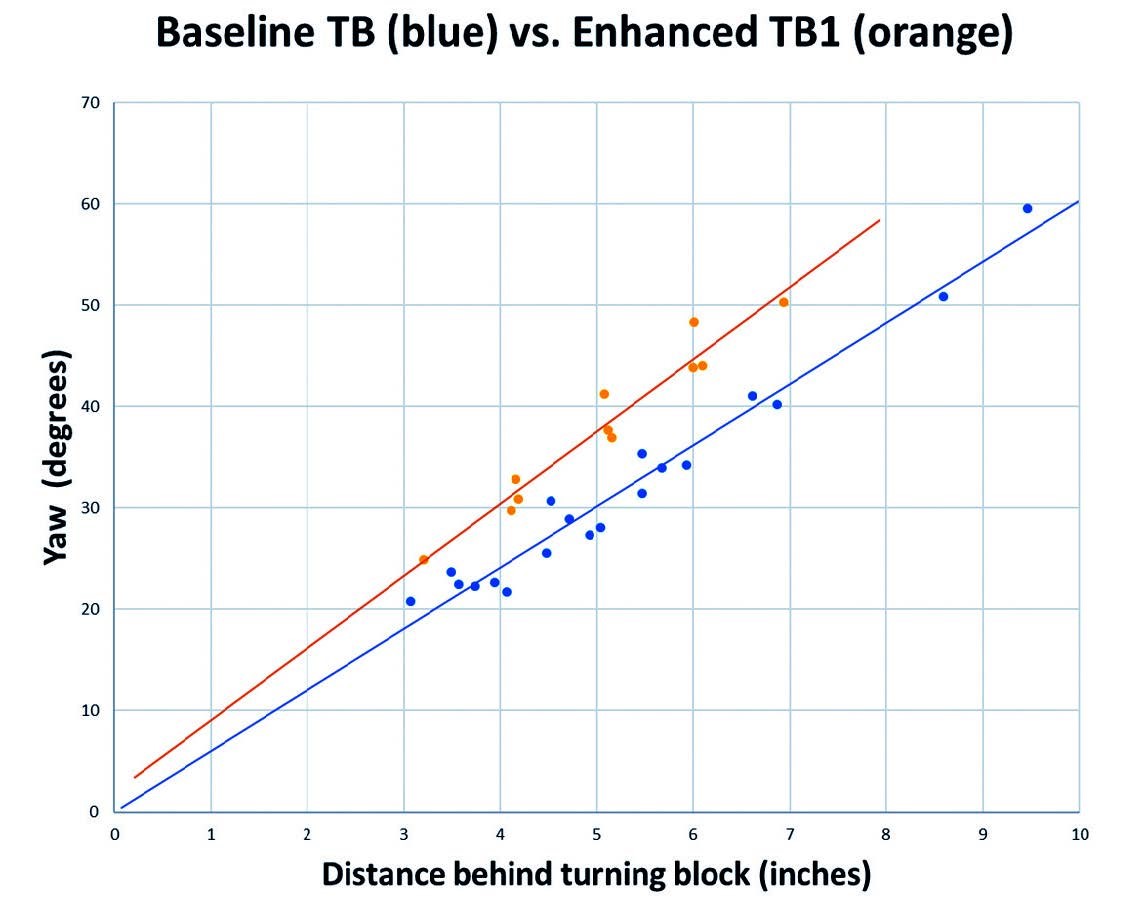 Figure 3. Higher-Performance Materials Produced, on Average, a Slope Increase of ~19%.

This demonstrated significant enhancement in performance allowed the team to focus on the more-effective Enhanced TB1 material. A second improved material—Enhanced TB2—was also investigated. In this case, two different material thicknesses were compared for the two material configurations (see Figure 4). 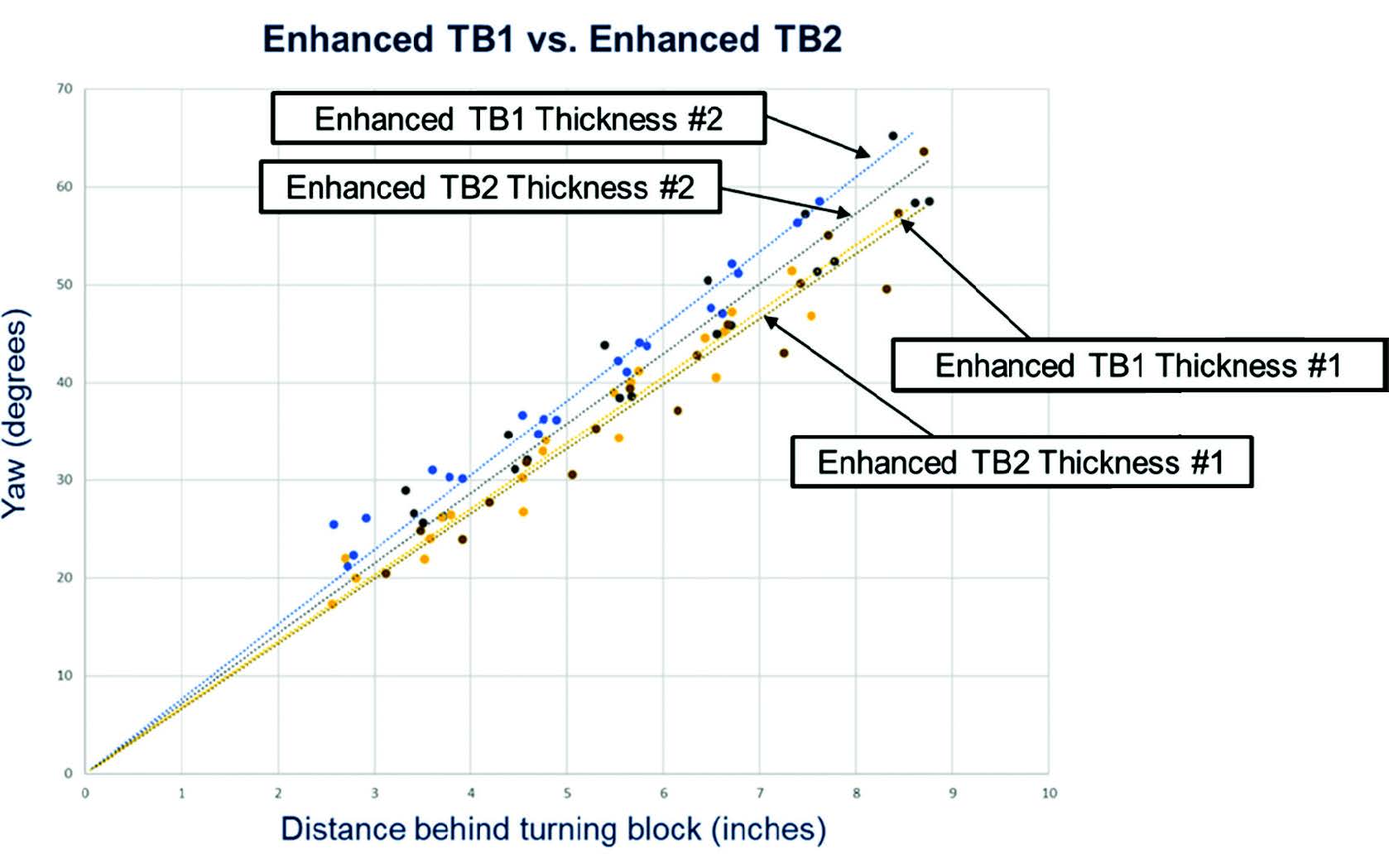 Both of these enhanced materials were observed to be more effective at inducing projectile tumbling than the baseline TB. It is important to note here that more data exist for the Enhanced TB1, and only limited shots were taken with the Enhanced TB2. Nonetheless, results indicate that the materials are likely similar in performance, with Enhanced TB1 performing slightly better than Enhanced TB2. Enhanced TB1 materials are also known to be more available in raw material form and are less expensive. So, from an optimization perspective, Enhanced TB1 proved to be a preferrable alternative and, therefore, was the main focus of testing for the bulk of the JASP program.

After initial testing, specific TB thicknesses and areal densities were identified to be the most promising. The initial goals were to understand how the projectile tumbled after interacting with the TB and determine the minimum amount of TB material needed to consistently engage the threat and induce the desired tumble.

Through high-speed video analyses, a projectile tumble rate for various TB configurations (i.e., multiple thicknesses) was calculated (as shown in Figure 6). (Once again, for security purposes, specific thicknesses, which correlate to areal density, have been excluded from this discussion.) As shown, the thicker the TB, the higher the tumble rate of the projectile. With thicker TB, there is more engagement of the TB by the threat, resulting in a more efficient result. The linear relationships are fairly quickly identified. 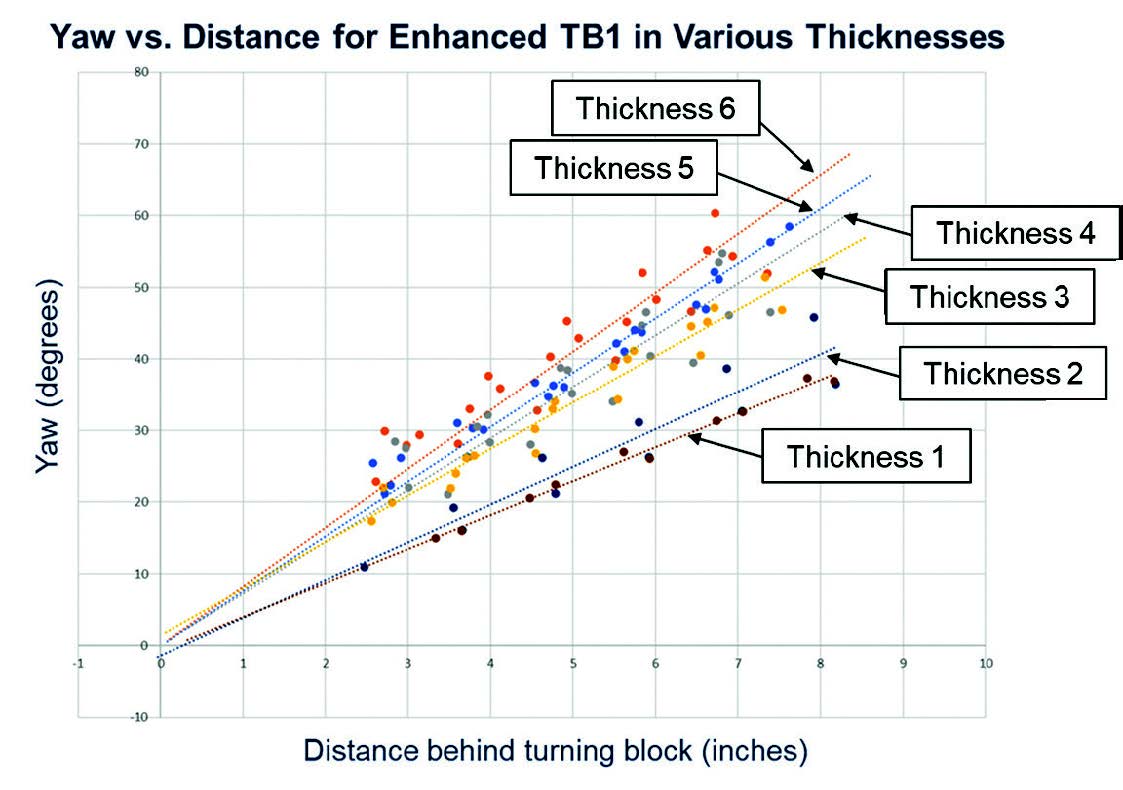 Figure 6. Tumble Rate Related to the Amount of TB Presented.

The team also investigated the TB thickness effect on projectile velocity after TB engagement, but prior to CP impact. While yaw is one significant factor, velocity is another; and TB thickness was found to play a significant role in velocity reduction. Because velocity is directly related to projectile energy, it plays a critical role in the amount of CP needed to arrest the projectile. The significant reduction recorded means less CP material is needed, as there is less energy in the tumbling projectile. This is an important factor to account for in overall system optimization.

Ultimately, this work to better understand the TB phenomenon resulted in a deeper understanding of the TB’s effect on the projectile(s) and of how to most effectively use this part of the spaced armor system.

Once the team better understood the TB effect, attention was turned to testing enhanced grades of CP materials and configurations. By varying the air gap and the amount of backer material, testers were able to stop the threats of interest. Similar to that performed for the TB, optimization testing established minimum thicknesses of CP materials required to arrest the tumbling AP projectile. In addition, the trade space between weight in the TB panel vs. the CP panel was explored extensively.

By varying CP areal density and distance, the relationship between total system weight and total system thickness became clear. (Note that system thickness is defined as the distance from the front of the TB panel to the back of the CP panel.) This relationship is shown in Figure 7 for three material combinations. Optimized systems were as much as 48% lighter than today’s state-of-the-art technology.

Future testing is expected to further define the trade space and boundaries of weight vs. thickness. Additionally, in using these data as a baseline for future aircraft optimization, armor solutions specific to aircraft geometries, space claim, and threat specifications can be designed.

OTHER TECHNICAL AREAS OF INTEREST

As mentioned, the team also investigated other pertinent aspects of this spaced armor technology, including obliquity, backface deformation of the CP, and the system’s multihit capability. These areas were explored to identify critical elements that should be considered when transitioning this technology to aircraft use.

Although one specific threat was the focus of this effort, multiple AP threats were ultimately tested. Because the TB defeat mechanism is different from traditional defeat mechanisms, this work was done to ensure protection against lower-level rounds was preserved even at these light weights. As expected, the armor demonstrated good multihit capability against the multiple threats.

Additionally, a common question with respect to this technology is, What happens if the projectile impacts at an oblique angle to the TB? Two critical angles of interest were thus investigated. Testing showed that one of these angles lowers the effectiveness of the TB due to the method in which tumble is induced. However, when integrating the TB-based solutions onto platforms, obliquity can be properly considered— through engineering, shotline analyses, and testing—to minimize system vulnerabilities.

Another integration factor of interest was backface deformation. Because this armor system may be mounted in an aircraft interior, it is important to consider what is behind the CP as the composites get in motion to capture and stop the projectile. Testing was thus performed with clay placed behind the CP. Clay is a widely used material in the body armor industry to help measure the backface deformation of armor. As shown in Figure 8, the backface signature was relatively low for these threats, measuring ~38 mm or less.

Overall, the work discussed herein demonstrated that the subject spaced armor technology can defeat the given AP threats even at extremely lightweight configurations. As mentioned, significant achievements in armor technology development were achieved, ultimately demonstrating a >40% weight savings over today’s state-of-the-art armor solutions. Several parameters were also identified to support integration engineering at the platform level.

This program was funded by U.S. Army Combat Capabilities Development Command Aviation & Missile Center (DEVCOM AvMC) and SOCOM. Government contributions to this program were considerable, and the authors extend special thanks to Dr. Mark Robeson and Mr. Daniel Camp from the DEVCOM AvMC at Fort Eustis. Mark, Dan, and others from the AvMC team not only provided funding but sparked many technical discussions that significantly enhanced the results of this program.

Mr. George Tunis is the founder and Chief Executive Officer of Hardwire, LLC. He has led numerous efforts in the design and production of composite-based armor systems for the U.S. Army, Marine Corps, SOCOM, law enforcement agencies, and critical domestic infrastructure protection. Mr. Tunis holds more than two dozen patents and a bachelor’s degree in mechanical engineering from the University of Delaware.

Mrs. Emily Tunis is the President and Chief Operating Officer of Hardwire, LLC. She oversees the company’s business development and operations and manages Government programs. She previously served as a support contractor to the Defense Advanced Research Projects Agency. Ms. Tunis holds a bachelor’s degree in physics and mathematics from Washington and Lee University as well as a master’s degree in systems engineering from Johns Hopkins University.

Mr. Ben Kremer is the Lead Survivability Engineer at Hardwire, LLC. He has been involved with and led armor development, engineering, and manufacturing programs for a wide range of applications, including ground vehicles, aircraft, infrastructure, and personnel. Mr. Kremer holds a bachelor’s degree in mechanical engineering from Purdue University. 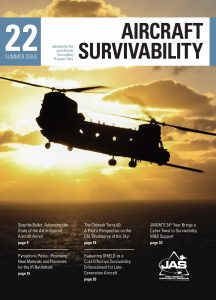