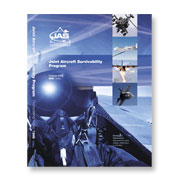 The JASP mission is to help make aircraft survivable in the face of detection, tracking, and engagement and to design planes that can function even when hit.

Accomplishing these goals across disciplines and Services means bringing together scientists and engineers whose expertise in aircraft survivability, design, technology, analysis, and testing will ensure that our best minds are addressing our most complex challenges.

JASP is at the forefront of developing a new breed of fighting machine, one that will protect both man and aircraft. The JASP analyzes material, processes, effects, and benefits to continually increase the level of protection to warfighters across the Armed Services. Whether by avoiding detection, developing countermeasures, separating critical components, using materials that suppress fire and explosion, or designing propulsion control systems that can reconfigure an engine damaged in flight, the JASP is committed to projecting today’s and tomorrow’s technologies into real improvements for the warfighter.

To appreciate the full range of the JASP mission, the Joint Aircraft Survivability Program DVD provides a complete overview of its varied work. Included on the DVD are interviews with Army, Air Force, and Marine pilots who have flown missions under enemy attack and who were able to return themselves and their aircraft to safety. This DVD is available by emailing contact@jasp-online.org.

This documentary uniquely presents the primary threat weapons to aircraft and the ballistic response or effect of an aircraft when hit by a threat. It contains combat and gun-camera footage and both lethality and survivability test analysis video, all of which are combined and edited to demonstrate the cause-and-effect relationship between threats and their effect on an aircraft on the battlefield. The benefits gained from using technologies in vulnerability reduction will further increase the viewers interest in, knowledge of, and appreciation for the survivability discipline.

Scenes of encounters between U.S. aircraft and anti-aircraft threats photographed during Operations Iraqi Freedom, Enduring Freedom, Desert Storm, and Restore Hope; the Vietnam conflict; the second Chechnyan war; and other encounters; vividly illustrate the threats lethality, their effects, and the subsequent damage processes that occurred in these conflicts. The anti-aircraft threats presented in this documentary include air-to-air missiles, surface-to-air missiles, man-portable air defense systems (MANPADS), rocket-propelled grenades (RPGs), anti-aircraft artilery (AAA), and small arms. Lethality test analysis video of these threats reveals the details of their fuzing and the generation of different types of damage mechanisms.

The updated Threat Effects video concludes by presenting some positive effects achieved by incorporating various vulnerability reduction features, either by altering the aircrafts design or by adding equipment to prevent a systems kill modes from occurring.

The production of Threat Effects received strong support from the survivability, lethality, intelligence, and operational communities. Sources for some material included in the project included:

JASPO is currently funding a training video project for JCAT, which is also produced by Mr. Ball and SURVICE. This new project will provide incoming JCAT members and other designated personnel with threat and damage training, threat-induced damage identification training, and an introduction to both aircraft design features and survivability features. The project will also focus on the JCAT’s purpose, processes, tenets, and real-world benefits, including the advantages gained from incorporating aircraft survivability features.

The updated Threat Effects DVD is For Official Use Only (FOUO) and not for public release. Distribution authorized to U.S. Government Agencies and their contractors only; critical technology; July 2006. JASPO is managing the requests for this DVD through DSIAC.