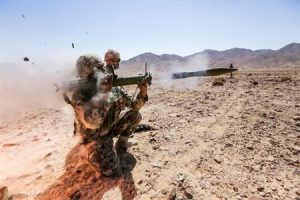 Under JASP sponsorship, the U.S. Army Research Laboratory (ARL) and the Naval Air Systems Command (NAVAIR) responded in May 2004 to an urgent request from an Operation Iraqi Freedom (OIF)-deployed unit and prepared an RPG Launch and Detonation Characterization Video for use as a combat aircrew training aid. This video is thought to be the first of its kind to aid helicopter crews in identifying RPG threats being encountered in Iraq. The video shows what the RPG looks like from the pilot’s view in the cockpit as it approaches the aircraft. The video will help our warfighters gain an understanding of the threat situation and take appropriate action. Their observations may also assist in improving after-action reports and threat assessments.

ARL, teamed with the Naval Air Systems Command (NAVAIR) and in conjunction with the Aberdeen Test Center (ATC), fired actual threat RPGs to emulate shots at a flying helicopter. A target was suspended 75 ft above the ground, and the RPGs were fired individually from a fixed launcher located at ground level 150 m from the target. A single shot was conducted during daytime hours, and six shots were conducted at night. Standard video cameras were strategically placed to capture various views of the launch, trajectory, and impact of the RPGs. Some cameras were outfitted with the F4949R Night Vision Goggle (NVG) or the F4949G (Leaky Green) NVG, and a forward-looking infrared (FLIR) camera was also used.

Copies of the video have been sent to the Course Chief, Aviation Tactical Operations Officer Course, the Army Shoot-Down Assessment Team, and the Joint Combat Assessment Team (JCAT) for their training and investigation purposes. Copies were also sent to MAG-16 Forward, MAG-16 Headquarters Building, Al Asad Air Base, Iraq, for viewing by aircrews currently in theatre. The video records will be provided to DSIAC.